Università Cattolica del Sacro Cuore organized three events in Brescia which contributed to the dissemination of results from its researchers, and in particular from the ARIA project for what concerns this article, to the general public.

Two events were organized on September 30, 2022 in the framework of the European Researchers Night: the first activity, which took place in the morning at the university Campus in via Garzetta, was dedicated to high school kids, while the second activity took place in the city center and was open to the adult population, as well as schools. Moreover, a third dissemination event occurred on October 21, 2022 in the context of the Celebration of Mind initiative, a world-wide series of dissemination events held on such day in honor of Martin Gardner’s birthday, where additional groups of high school students were welcomed in via Garzetta. Across the three initiatives, around 550 students attended at least some of the 50 presentations offered by UCSC researchers; in particular, 20 activities were offered on STEM topics, to which approximately 250 students took part.

Goal, methodologies and results on an application motivated by his activity on the ARIA project were presented by Dr. Francesco Ballarin. The presentation was entitled “Fluid dynamics in the aorta based on CT scan data”. After a brief summary of the role of the aorta in the human circulatory system, attendees were introduced to a specific disease, the “coarctation of the aorta”, in which a part of the blood vessel has an abnormal narrowing, called “coarctation” or “stenosis”. It is of interest to introduce a parametrization on the stenosis to be able to compare e.g. an healthy case to a diseased case with mild, moderate or severe stenosis. Volunteers were then sought among the attendees so that they could carry out themselves at least one out of three tasks that are often needed to go from the clinical data to the computational model. In the first task, we discussed how CT scan data can be displayed as a grayscale image, and reconstructed a healthy aorta together. In the second task, attendees could see with their very own eyes some 3D printed reconstructions of the heart and of the aorta with various levels of stenosis (see Figure 1). In the third and final task, attendees were shown a graphical interface in which they could change the stenosis parameter and obtain a real-time visualization of the streamlines in the aorta (see Figure 2). The latter two tasks did show a selection of the methodologies developed within the ARIA project: namely, the second task was based on a shape parametrization, while the third task employed a non-intrusive ROM to guarantee real-time interaction with the user. 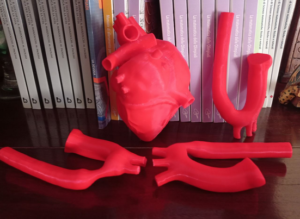 Figure 2: parametrization of the stenosis (bottom left) and real-time visualization of streamlines in the aorta by means of a non-intrusive ROM (right).