A detailed report for the progress achieved by the antennas and radio propagation sub-project of BoWI can be downloaded here.

Antennas and radio channel are crucial parts of BoWI project which is comprised of low-power wireless sensor nodes operating in close proximity to human body hence forming a WBASN. The major scientific contribution of this thesis is focused around two main topics for WBASN applications, namely radio channel characterization and antenna design, as the two are closely related.

For the first part, numerous experimental campaigns were undertaken on real human subjects in rich multipath environments using ultra-miniaturized chip antennas (only few mm footprint) mounted under pattern diversity configuration. Numerous radio channel parameters were investigated in this context e.g., channel capacity, delay spread and fading, based on their significance from propagation perspective. A numerical channel simulator has also been developed with the power to simulate arbitrary WBASN scenarios using tunable, realistic body morphologies. The application of the simulator has also been demonstrated for interactive gesture recognition concept as proposed in the BoWI project.

BoWI project mainly employs existing WPAN and WBAN standards as IEEE 802.15.6, 802.15.4 respectively. In order to support the preliminary research between different project partners, smart innovative and wearable platform was developed by the BoWI project partners, named as Zyggie (Fig. 1 (a)). The Zyggie sensor comprises a multi-layer substrate board having two miniaturized LTCC chip antennas (monopoles) with dimensions of 7 × 2 × 1.20 mm3 tuned in the ISM 2.4 GHz band (i.e., physical length of λ0/18 only @ 2.40 GHz). The chip antennas are mounted orthogonally to support radiation pattern illustrated in Fig. 1 (b), (c).

The diversity performance of off-BAN channel was further studied using real-time channel measurements exploiting the antenna diversity of miniaturized chip antennas of Zyggie sensors (Fig. 1 (a)). Measurements were conducted on a human subject with a BMI of 23.4 in an indoor laboratory environment under the off-body configuration as shown in Fig. 2 (a). The ergodic MIMO channel capacity C (bits/sec/Hz) was computed for the resulting 2×2 MIMO channel using the measured complex sub-channel transfer gains hij, (i, j) ϵ {1, 2}2. Results are shown in Fig. 2 (b) for both LoS and NLoS configurations, compared to those for ideal 1×1 (SISO) and 2×2 (MIMO) i.i.d Rayleigh channels. As evident, the proposed diversity scheme can offer improved capacity compared to SISO scheme, especially at higher SNRs with an average capacity increase of 2 bps/Hz (= min. (M, N)) per 3 dB rise in SNR.

In order to meet the challenges of link reliability, data transfer, and other services, reliable knowledge of channel model is crucial for system-level modeling. Therefore, we proposed and implemented a robust algorithm based on Kolmogorov-Smirnov (K-S) hypothesis testing to detect the best-fit distribution model of empirical radio channel data. In this context, seven standard distributions have been used as benchmarks which are commonly used to statistically describe fading i.e., Normal (N), Lognormal (LG), Rayleigh (R), Weibull (W), Gamma (G), Exponential (E) and Nakagami-m (NG). The block diagram of the proposed algorithm is represented in Fig. 3 (a). The fitting algorithm was further applied to determine the best-fit model for small-scale, first-order fading for BAN channels using real-time measurements. The fitting results for a sample LoS off-body scenario are shown in Fig. 3 (b) along with the models detected by the algorithm for all the measured off-body scenarios listed in Table 1. Based on the statistical results, a Normal distribution has been recommended for off-body LoS channels and a Weibull distribution for QNLoS scenarios.

Human body is a lossy medium with high tissue parameters at microwave frequencies and can strongly influence the antenna performance as the latter operates in its near vicinity. In order to investigate the impact of human body, a printed monopole antenna with a partial ground plane was designed for ISM 2.4 GHz bandwidth (2.40-2.4835 GHz) and further placed on a lossy tissue model. It was observed that the antenna parameters are highly degraded in proximity to body e.g., the frequency is detuned due to changes in antenna input impedance and the gain in the E- and H-planes drops along with the radiation efficiency of the antenna due to losses caused by the tissue. Also, the antenna-body spacing has been observed to be a very important factor to control the on-body antenna performance. The maximum impact has been observed for minimum spacing for the reflection coefficient, antenna gain and radiation efficiency. However, the impact of body tissue has been observed to become less and less severe as the spacing is increased till we start approaching the free space performance. This is due to the reduction in the near-field interaction of the antenna with the body tissue as the spacing is increased.

For on-body applications, an omni-directional radiation along the body surface is required with a preferable vertical polarization. A monopole antenna has been known to be a suitable candidate for such applications however, it has a too large height (λ0/4 where λ0 = 12.5 cm@ 2.40 GHz) and is not a realizable solution for on-body applications due to portability issues. Therefore, an Inverted-F antenna (IFA) has been designed for resonance inside ISM 2.4 GHz bandwidth, while maintaining a much lower profile than its counterpart monopole antenna (height of λ0/12 only at 2.4 GHz). Meanwhile, it achieved successfully the optimum requirements of both radiation pattern and polarization for on-body applications. The performance of the antenna has also been validated in proximity to human body and has been reported to be quite stable and comparable to that of free space, thanks to the inclusion of a full ground plane.

A Short-circuited Ring Patch Antenna (Fig. 4) has also been considered in order to design a single antenna useable for both on- and off-body communications at single frequency (2.45 GHz). The first two modes of this antenna were investigated thoroughly, namely TM01 and TM11 respectively. The TM01 mode offers an omni-azimuthal radiation pattern with a vertical polarization (i.e., suitable for on-body links) whereas TM11 mode offers radiation maximum in the broadside direction (i.e., suitable for off-body links). Two different prototypes of the antenna have been designed to achieve the required pattern diversity for both on- and off-body applications at 2.45 GHz as evident by results shown in Fig. 5 and Fig. 6 respectively. This concept of different modes excited at same frequency has been used further for the design of a single pattern diversity antenna at 2.45 GHz. 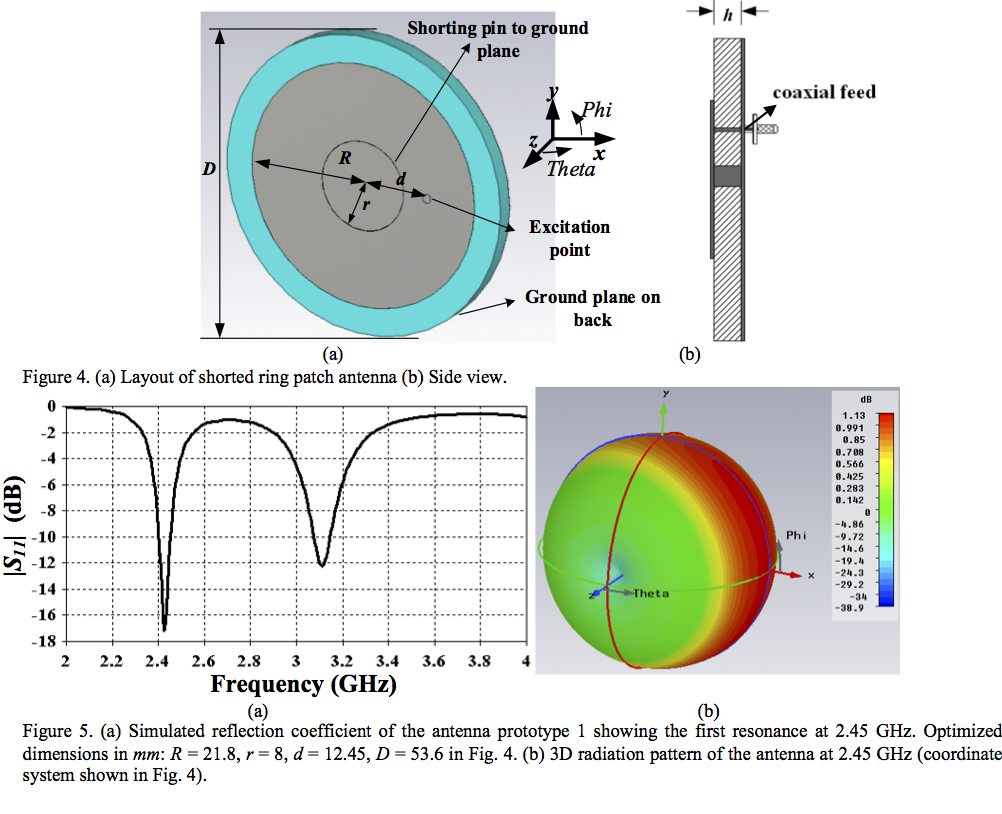 BoWI project is based on a body-centric wireless network of various sensors at different on-body locations and further using a set of body postures (called alphabets) to interact with the digital world. Therefore, a robust numerical channel simulator has been developed in this context with the power to simulate arbitrary WBASN scenarios under varying body postures. In the first stage, an electrically small chip antenna was designed having overall dimensions of few mm only (Fig. 7), in order to use in conjunction with the channel simulator. The antenna resonates inside ISM 2.4 GHz bandwidth (2.40-2.4835 GHz) with |S11| < -10 dB as evident from its reflection coefficient represented in Fig. 8. 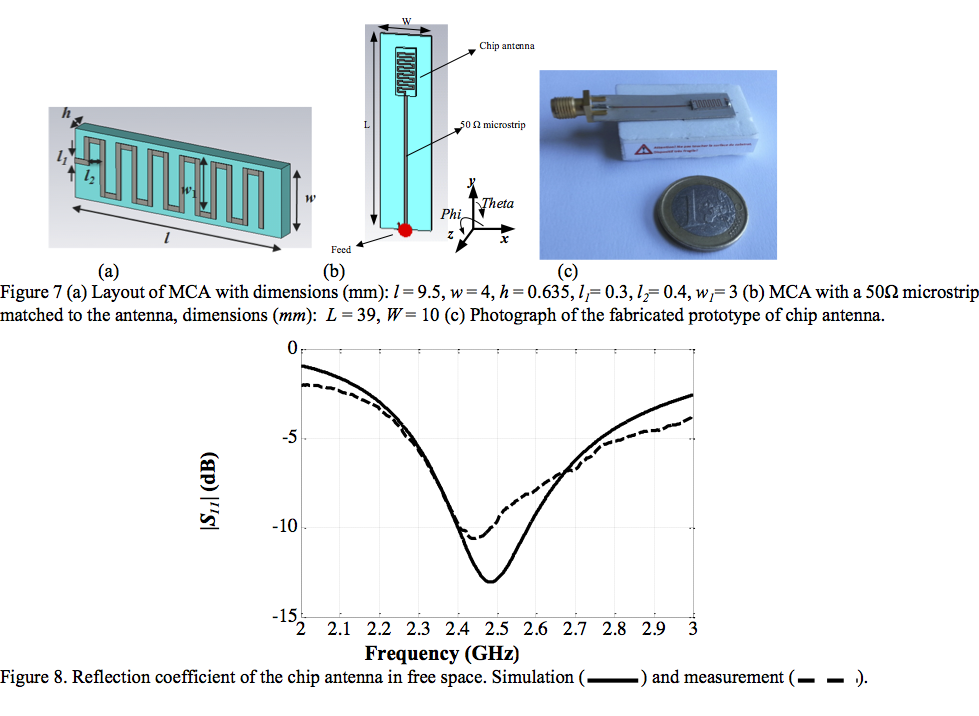 A robust channel simulator has been developed considering realistic and tunable, body morphologies in CST Microwave Studio using the designed chip antenna. The simulator was realized after performing a number of intelligent simulation enhancements to step down the extraordinarily large problem complexity to realize with limited simulation resources. The simulator has been tested successfully with various body postures. Full-wave simulation results for one of the body postures are presented in Fig. 9. The application of the channel simulator has also been demonstrated for posture classification based on distance estimation based models.

For on-body communications, an omni-azimuthal radiation pattern along the body is required with a preferably vertical polarization. On the other hand, for off-body links, the antenna radiation should be directed away from the body (broadside direction). This implies that separate antennas are required for both on- and off-body operations for optimum BAN performance from radiation and polarization perspectives. However, space and form-factor are crucial for BANs. Therefore, a single dual-mode antenna (Fig. 10, Fig. 11) has been proposed which can offer simultaneously both radiation and polarization diversities at 2.45 GHz. 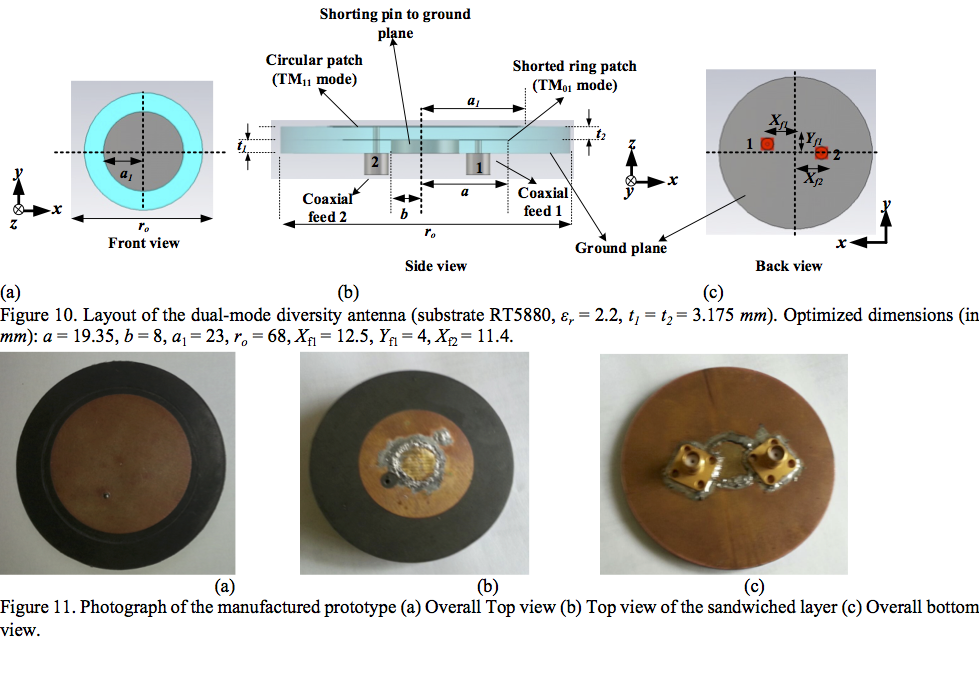 The antenna offers appropriate radiation pattern and polarization requirements for both on- and off-BAN applications along with a stable on-body performance and negligible cross-modal coupling as evident from the scattering parameters represented in Fig. 12. As evident, all measured S-parameters for both modes at 2.45 GHz are lower than -10 dB with a coupling coefficient |S21| of -18 dB at 2.45 GHz.

The 3D radiation patterns of the two resonant modes (TM01 and TM11) at 2.45 GHz are also illustrated in Fig. 13. As evident the antenna successfully generates the radiation pattern diversity as deemed suitable for both on- and off-body operations. The antenna gain reaches 1.11 dBi for the fundamental TM01 mode with a total efficiency of 92% at 2.45 GHz. The gain of TM11 mode is 7.12 dBi with a total efficiency of 93% at 2.45 GHz. 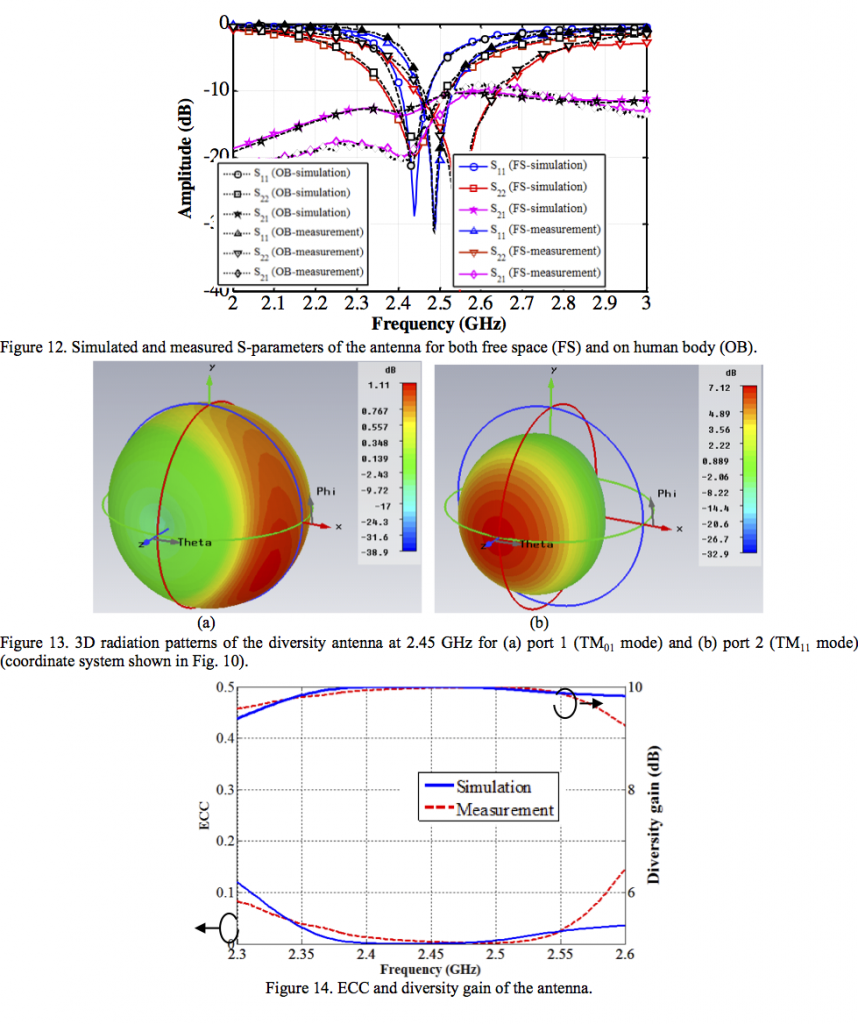 Also for diversity applications, the envelope correlation coefficient (ECC) of the antenna has been calculated which was observed to be close to zero with a corresponding diversity gain of around 10 dB at 2.45 GHz (Fig. 14). This also suggests the suitability of the proposed antenna for diversity and MIMO systems.

Once the radiation pattern and polarization diversities were achieved using the proposed antenna, their interest for on-body applications at 2.45 GHz was also studied. Significant improvement in link budget has been reported for both full-wave simulations and realistic measurements (up to 15 dB and 9 dB respectively) as presented by corresponding results in Fig. 15 and 16. 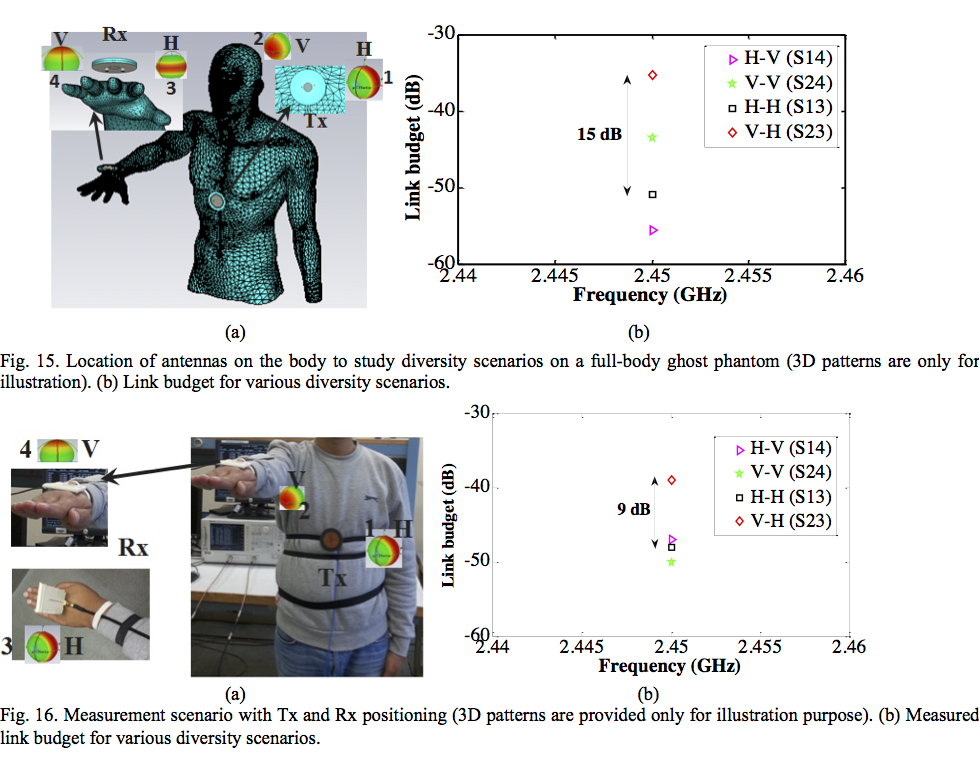 The usefulness of ultra-miniaturized chip antennas has been demonstrated in conjunction with diversity for future low power and miniaturized WBASNs, thanks to the improved data rates compared to SISO systems. A robust algorithm has been developed for statistical fitting of real-time BAN channel data and fading models have been proposed for both on- and off-body communications.

The design of a dual-mode diversity antenna was presented at ISM 2.4 GHz with appropriate radiation pattern and polarization requirements for both on- and off-body communications. The antenna was also observed to be a useful candidate for diversity and MIMO systems, thanks to its negligible cross-correlation and a diversity gain close to 10 dB. Finally, the suitability of potential pattern and polarization diversities has been demonstrated with a remarkable gain in link budget for body-centric applications.