The objective of this sub-project is to propose new cooperative transmission schemes in the context of Wireless Body Area Network (WBAN), such as BoWI, and with two transmission schemes: WBAN to base-station and intra-WBAN communications. Up to now, the first scenario was mainly studied.

In the BoWI network, the nodes collect information via three sensors: accelerometer, gyrometer and magnetometer. To detect the posture, inertial and RSSI data are transmitted wirelessly to a data center (DC), located out of body. For the current BoWI prototype, all nodes communicate independently with DC. However, this topology is infeasible for multiple BANs in a network, because of a super complicated routing protocol to manage all the communications with DC. Therefore, a centralized communication scheme is carried out with an on-body. center node (CN) which receives all information regarding the BAN then transmits to DC (see Fig. 1). Accordingly, two types of communications exist in this topology: 1) all nodes send its data to CN – called “intra-BAN”; 2) CN gathers all information it receives and sends to DC, called “extra-BAN”. Typically, intra-BAN is specified as a very short-range communication, but facing many critical issues: body tissue absorption, body fading, gesture effect, antenna polarization… On the other hand, extra-BAN carries out the transmission from short to medium distance in both indoor and outdoor environment. Due to the extreme importance of power constraint in BAN, our objective is to propose an energy-efficient transmission protocol for both intra-BAN and extra-BAN. Taking advantage of the multiple nodes, we propose a distributed precoding technique for the extra-BAN communication. The objective is to investigate the propagation scenarios where the distributed precoding technique brings improvement in terms of transmission energy reduction. 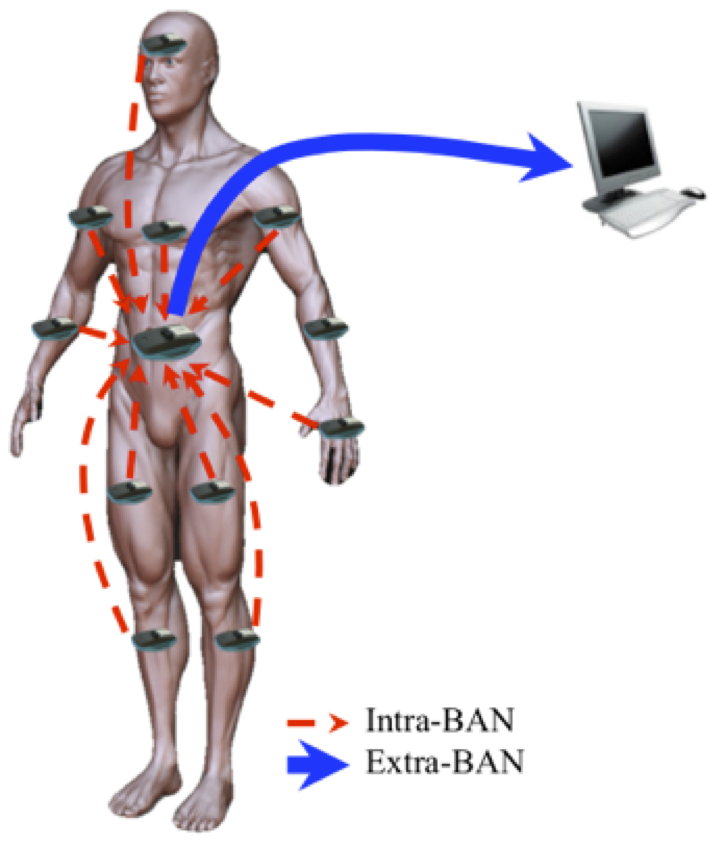 The distributed precoding is based on a cooperative communication between 1 or multiple relays and a source node to transmit toward a DC. This cooperation helps increasing the diversity, thereby improving the energy efficiency. Two types of relay is considered (see Fig. 2): 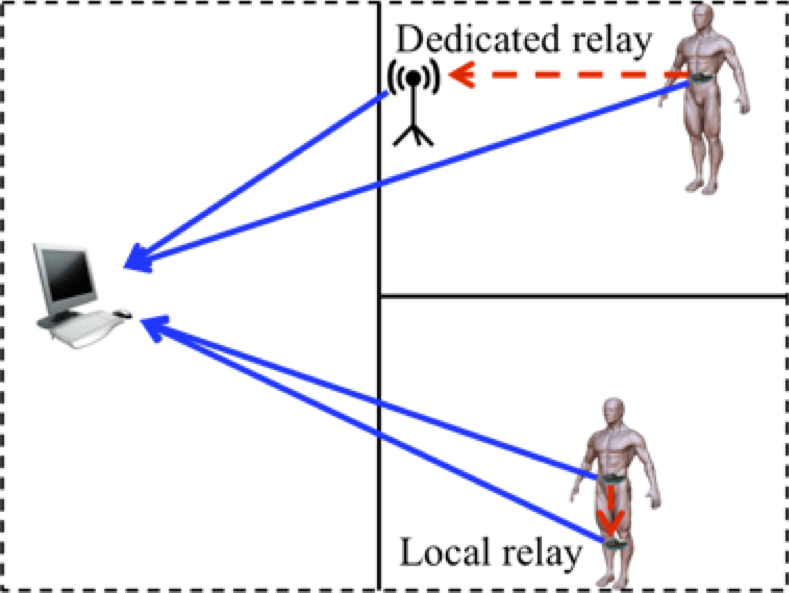 Thanks to the channel state information at transmitter (CSIT), obtained by a feed back link, the MIMO precoding deals profitably with channel impairments, improving the energy efficiency.  In our study, we choose the minimum Euclidean distance based precoding technique for its impressive performance compared to state-of-the art.

Our contribution consists in the proposal of the distributed version of the max-dmin precoder for the extra-BAN and its theoretical analysis of its BER performance. By simulations, we are also able to evaluate the energy efficiency of the whole communication protocol and to vary the propagation conditions.

According to the relaying type, the used timing resources are different. As presented in Fig.3, the AF protocol proposes a better spectral efficiency than DF by reducing the number of time slot to one in the local exchange phase? Besides, the power allocation between the 2 phases clearly impacts the performance.  This power allocation strongly depends on the position of the relay w.r.t. the source and the destination. 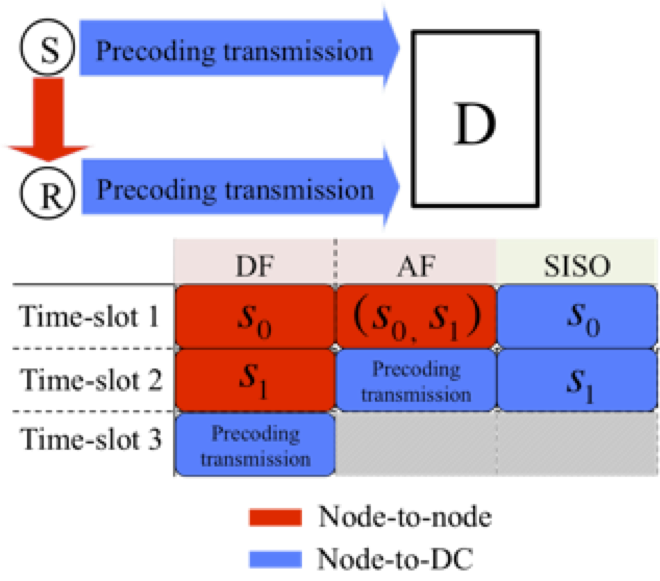 To maintain low energy consumption, the feedback link that transmits the CSIT at the source and at the relay should be low rate. To do so, the max-dmin precoder can be quantified thanks to a codebook.  This codebook is computed off-line and is available at the source/relay and at the destination. After estimating the CSI at the destination, the DC chooses the best matrix index in the codebook and sends it back to the source/relay. All the computations are made at the DC, which is power constraint-free and computational constraint-free.

We evaluate the performance of our distributed precoding by Monte-Carlo simulation (using Matlab) for both DF and AF scheme. The optimal power allocation is carried out by numerical search to obtain best bit-error-rate (BER) in each case. Note that we have also developed the theoretical analysis of the DF BER performance and we are now able to compute the power allocation analytically. The comparison with conventional scheme such as single input – single output (SISO), maximum ratio combining (MRC) for the 1×2 system, and the distributed Alamouti is performed (Fig. 4). In this investigation, we study the case when a local relay is used; the source-relay distance then is set to be 5% of source-destination one. The optimal power allocation (OPA) offers a significant improvement compared to an equal power allocation (EPA). Regarding the spectral efficiency, the AF scheme achieves the same as SISO and MRC; the twice of the distributed Alamouti and 1.5 times of the DF scheme. Meanwhile, the AF and DF scheme do not show any performance difference. 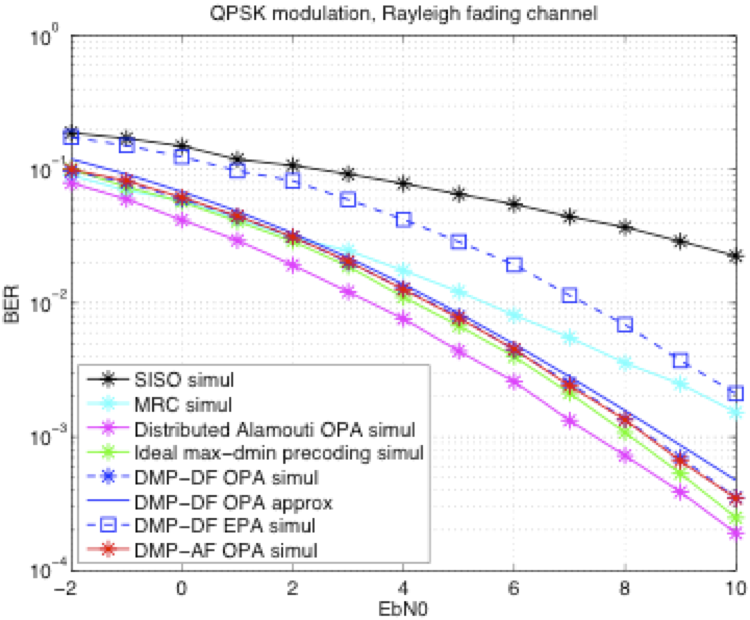 Taking into account of the radio frequency blocks consumption in both transmitter and receiver, we study the energy efficiency of our distributed precoding (Fig.5). Thanks to the better spectral efficiency, the AF scheme consumes less energy than the DF scheme. The figure 5 shows that with the optimal power allocation, we could economize substantially the energy. Referencing with the conventional scheme in terms of power consumption, our scheme outperforms in medium distances (i.e. from 17m) in an environment with a path loss exponent equal to 2.6. Due to the fact that the BoWI network might be working in indoor thus the path loss would be more wicked (exponent equal to 3 for example). As a result, our distributed precoding takes the advantage in weaker distance, probably in several meters. 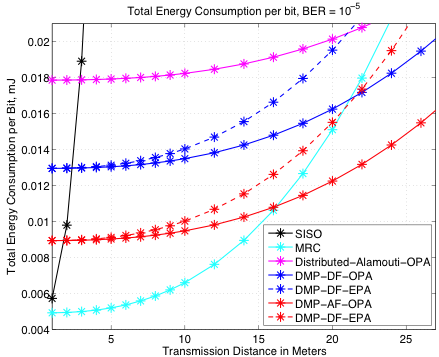 We also study analytically the performance of our distributed precoding for both the AF and DF schemes. This analysis facilitates the performance evaluation and the power allocation in a large variety of scenarios. The objective is to compute the error probability expressed as a function of the probability density function (pdf) of dmin.

As illustrated by Fig. 6, in the case of DF, the analysis takes into account error events at the relay, whereas in the case of AF, the correlated channel implies a new eigenvalues distribution, and therefore, a new calculation of the pdf of dmin. 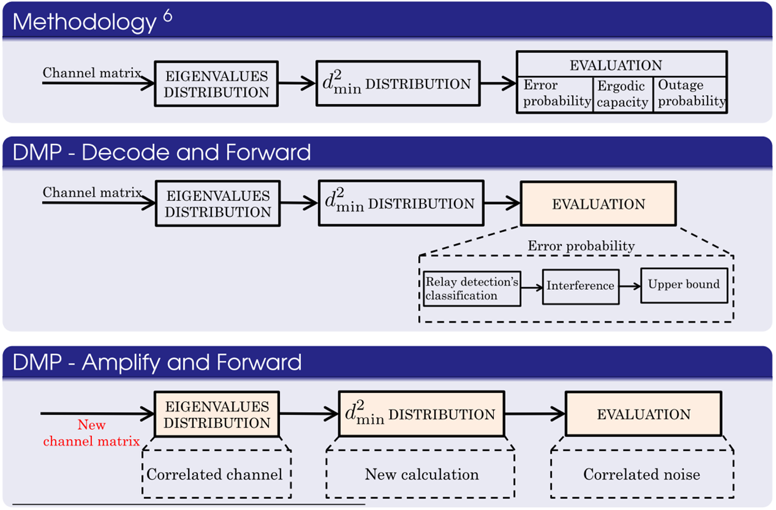 The derived upper bounds of the error probability for the DF transmission scheme, validated with Monte Carlo simulations, allow an efficient power allocation, as illustrated by Fig. 7. For the AF scheme, the gain of the power allocation in terms of outage probability is also about 3 dB. 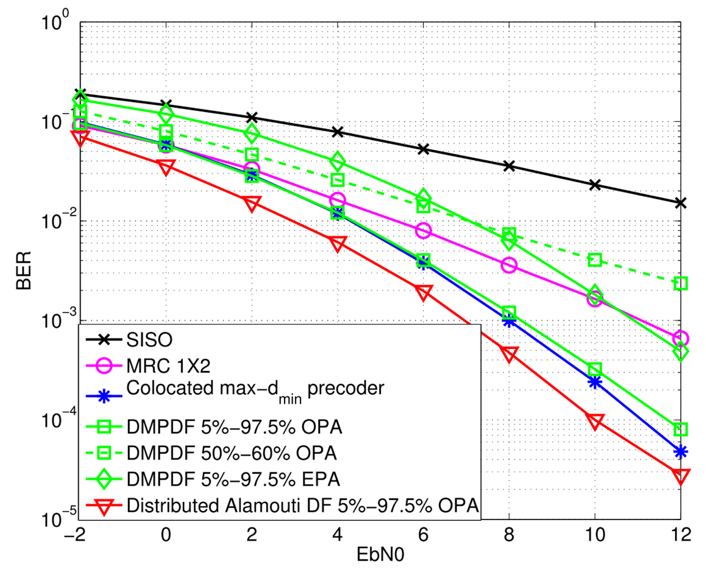