The 60GHz downconverter architecture is presented on the Figure 1.

The 60GHz is composed of three parts:

I. The antenna array of primary source

Two topologies have been studied:

The LTCC technology is adapted to the integration of millimeterwave system . In this way, the design of an antenna has been designed. DRA antenna is a good candidate for millimeterwave antenna for several reasons: 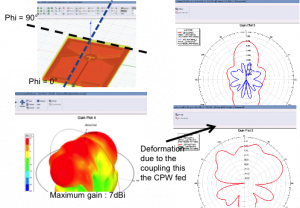 To limit the risk of components integration, PCB technology is chosen for the first prototype. The final goal is to ensure the co-integration in order to minimize the interconnection losses. Then a patch array antenna has been designed on the same substrate than the downconverter.

The specification is based on an optimization of the illumination of the transmitarray antenna:

Due to the high risks concerning the integration and interconnection of the MMIC chip with wire bonding, for the first prototype the antenna array and the downconverter are interconnected by a short coaxial cable.

In the project, the array of primary source should be interconnected to the 60GHz down converter for channel sounding application or to the B-COM platform for multi-users transmission. 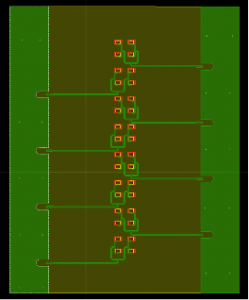 The downconversion is based on a commercial chip MMIC provided by GOTMIC. Due to the distance between input antenna imposed by the array antenna, the integration of the chip is a technological challenge with several constraints:

The measurement results are presented on the Figure 11.

The 8 RF downconverters are integrated on a support. 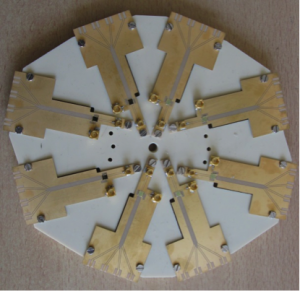 A PCB circuit has been design to distribute the same local oscillator signal for the 8 downconverter. The LO is generated from a Analog devices card with a tuning voltage of the frequency to fix the FI frequency depending on the equipment used (Vector Network Analyser, channel sounder…).