At the beginning of the projet 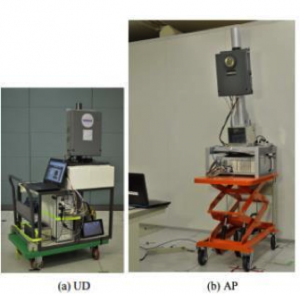 To our knowledge, it doesn’t exist a quasi 3D channel sounding based on a digital and/or analog beamforming technich. Only mechanical scanning is used at 60GHz and analog beam scanning at 28GHz. The main interest of digital beamforming is the capacity to detect simultaneously the directions of arrival that is very important in scenario with mobility. That is impossible with mechanical scanning or single beam scanning

To improve the angular accuracy, this system is installed on a 2D positioner. But the sweep channel is very low (40 minutes) and so only static environments can be characterized.

Then the NIST designed a new millimeterwave sounder based on 4 phased array antenna and published it in December 2018. [3]

The use of phased array antenna allows reducing measurement sweep time. This system is limited to a 2D scan (azimuth plane). To our knowledge, THE NIST channel sounder in millimeterwave band is the more advanced.