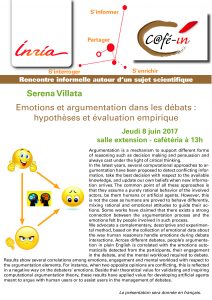 Argumentation is a mechanism to support different forms of reasoning such as decision making and persuasion and always cast under the light of critical thinking. In the latest years, several computational approaches to argumentation have been proposed to detect conflicting information, take the best decision with respect to the available knowledge, and update our own beliefs when new information arrives. The common point of all these approaches is that they assume a purely rational behavior of the involved actors, be them humans or artificial agents. However, this is not the case as humans are proved to behave differently, mixing rational and emotional attitudes to guide their actions. Some works have claimed that there exists a strong connection between the argumentation process and the emotions felt by people involved in such process. We advocate a complementary, descriptive and experimental method, based on the collection of emotional data about the way human reasoners handle emotions during debate interactions. Across different debates, people’s argumentation in plain English is correlated with the emotions automatically detected from the participants, their engagement in the debate, and the mental workload required to debate. Results show several correlations among emotions, engagement and mental workload with respect to the argumentation elements. For instance, when two opposite opinions are conflicting, this is reflected in a negative way on the debaters’ emotions. Beside their theoretical value for validating and inspiring computational argumentation theory, these results have applied value for developing artificial agents meant to argue with human users or to assist users in the management of debates.