In this short talk, the impact of noisy observation of data in decision making is studied through the lenses of information and game theories. The conclusions of this talk are general and span several applications in engineering, including supervised machine learning, data transmission over networks, and state estimation in electrical smart grids. 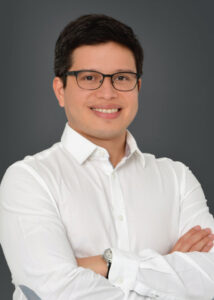 Samir M. Perlaza is a permanent member of the scientific staff at INRIA, the French Institute for Research in Computer Science and Applied Mathematics; an associate member of the Department of Mathematics (Laboratory GAATI) of the University of French Polynesia; and a visiting research collaborator in the Department of Electrical and Computer Engineering at Princeton University. He received the M.Sc. and Ph.D. degrees from École Nationale Supérieure des Télécommunications (Telecom ParisTech) in 2008 and 2011, respectively. From 2008 to 2011, he was also a research engineer at France Télécom – Orange Labs (Paris, France). He has held long-term academic appointments at the Alcatel-Lucent Chair in Flexible Radio at Supélec; Princeton University and the University of Houston.

Dr. Perlaza’s research interests are in the areas of information theory, game theory, data sciences, and their applications in wireless networks, power systems, and artificial intelligence. Among his publications in these areas is the recent book ‘‘Advanced Data Analytics for Power Systems’’ (Cambridge University Press, 2021).

Dr. Perlaza has served as an Editor of the IEEE TRANSACTIONS ON COMMUNICATIONS, the IET Smart Grid Journal, and Frontiers in Communications and Networks.

Recognition of his work includes the Alban Fellowship and the Marie Sklodowska-Curie Fellowship, both from the European Commission.

The presentation will be in English and streamed on BBB.