The Algae in silico Inria Project Lab, funded by Inria,  focuses the expertise and knowledge of biologists, applied mathematician and  computer scientists to propose an innovative numerical model of microalgal culturing devices. The latest developments in metabolic modelling, hydrodynamic modelling and process control are joined to propose a new generation of advanced simulators in a realistic outdoor environment. The project gathers 5 Inria project teams and 3 external teams. 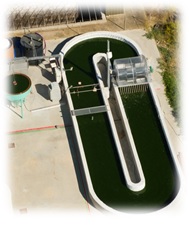 Microalgae potential has been re-discovered in the last decade (Chisti, 2007). They may be the source of innovations in the fields of energy, chemistry, human nutrition, cosmetics and animal nutrition (Williams & Laurens, 20210). Indeed, microalgae are recognized for the extraordinary diversity of molecules they can contain: proteins, lipids (for biofuel or long chain polyunsaturated fatty acids for human health), vitamins, antioxidants, pigments (Spolaore et al, 2006.).

In the quest for less impacting bioenergies, microalgae turned out to be an emerging and promising solution for the future. Major economic developments on the horizon of a decade are expected (Hu et al. 2008). Without using arable land, they offer the possibility of producing third generation biofuels from industrial CO2 sources while extracting their nutrients from recycled water.It is thus part of a strategy for recycling and recovery of waste generated by human activity.In addition, microalgae can grow very rapidly. They can contain up to half their weight in lipids (Sheehan et al., 1998, Cadoret & Bernard, 2008), which can be turned into biofuels. Biofuel productivity could then be 10 to 30 times higher than what is currently achieved with oleaginous terrestrial plants.

These organisms have so far received little attention. They constitute a vast field of research for which everything remains to be done and understood, with, at the end, many industrial applications in the short (high added value products) and longer term (biofuel). INRIA has developed in recent years many models at different scales, and we are among the most advanced at international level, especially for macroscopic modelling (BIOCORE) or hydrodynamic modelling (ANGE) .

In addition, we have access to 3 experimental platforms implemented in the previous projects ANR-Shamash, ANR-Symbiosis, ANR-Factor 4, FUI-Salinalgue: the LBE Algotron / Narbonne  and Full Spectrum (Villefranche-sur-mer and Sophia-Antipolis). These hyper-instrumented platforms  support model calibration and validation. They are precious for testing and assessing the advanced monitoring and optimisation algorithms.