2.2 Objective 2: Examine the uses of the KASSIS solution and its impact on active learning in higher education

Seven experimental studies were carried out to achieve this goal.

Study 2: Few studies had previously addressed the effects of different types of note taking (longhand or keyboard) on the quality of notes or learning outcomes (e.g. Mueller & Oppenheimer, 2014). To our knowledge, no study has evaluated the effect of digital note taking using a pen-based tablet on students’ behavior and learning outcomes. The aim of this study was thus to evaluate note-taking efficiency with paper, pen-based tablet, or keyboard. An experimental study in a laboratory setting (copying task followed by note-taking task during a video lecture) was conducted with 81 students (paper / pencil pen-based tablet / keyboard). Results showed that note taking was faster with a keyboard (but this is also the most commonly used note-taking type), followed by paper (+25% compared with keyboard) and pen-based tablet (+60%). The number of words written was also higher for the keyboard. No significant difference was observed for learning outcomes.

Study 3: Even though tablets with a pen are not the best medium for taking notes, at least for novice students, they do allow users to draw sketches more easily than computers do. KASSIS also allows two or more students to engage in collaborative drawing in a shared space. Collaborative drawing has so far received scant attention from researchers (see Giljers et al., 2013, or Van Dijk et al., 2014), and neither of these studies was conducted in a pen-based digital environment. The aim of this study was to evaluate the KASSIS whiteboard for collaborative drawing (dyads). 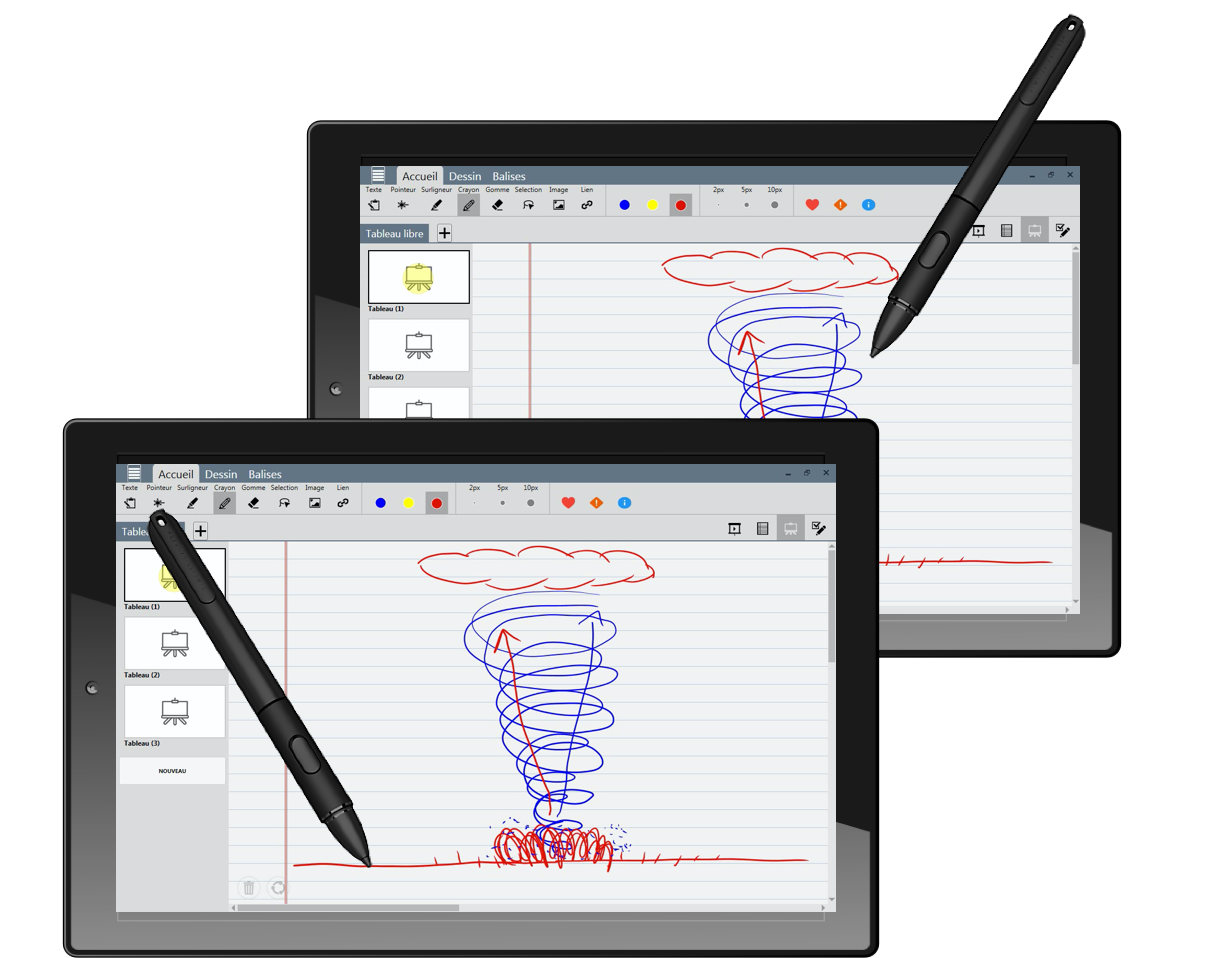 Seventy-two students had to draw sketches after reading a text on how tornadoes work (see figure above). We compared a full collaborative drawing condition with a scripted condition (think-pair-share method) in which students had to 1) draw individually, 2) compare their sketches, and 3) produce a collaborative drawing in the final step. Results showed that drawings in the think-pair-share condition were of a higher quality. Students’ interest for this activity was relatively high in this condition.

Study 4: KASSIS collaborative whiteboards were also tested in an anatomy lecture with 72 physiotherapy students (IFPEK, Rennes). Their task was to draw parts of the spine based on a video tutorial (see figure below). In the first step, the sketches were produced individually with KASSIS. In the second step, they were produced in dyads using a collaborative whiteboard. The dyads were either composed by the teacher, based on the quality of the students’ first sketch (heterogeneous dyads) or self-selected (formed by the students themselves). Results showed that the heterogeneous dyads selected by the teacher drew better sketches and displayed better memorization than the self-selected dyads. The study also showed a very high level of interest for KASSIS and the collaborative drawing activity among both teachers and learners. 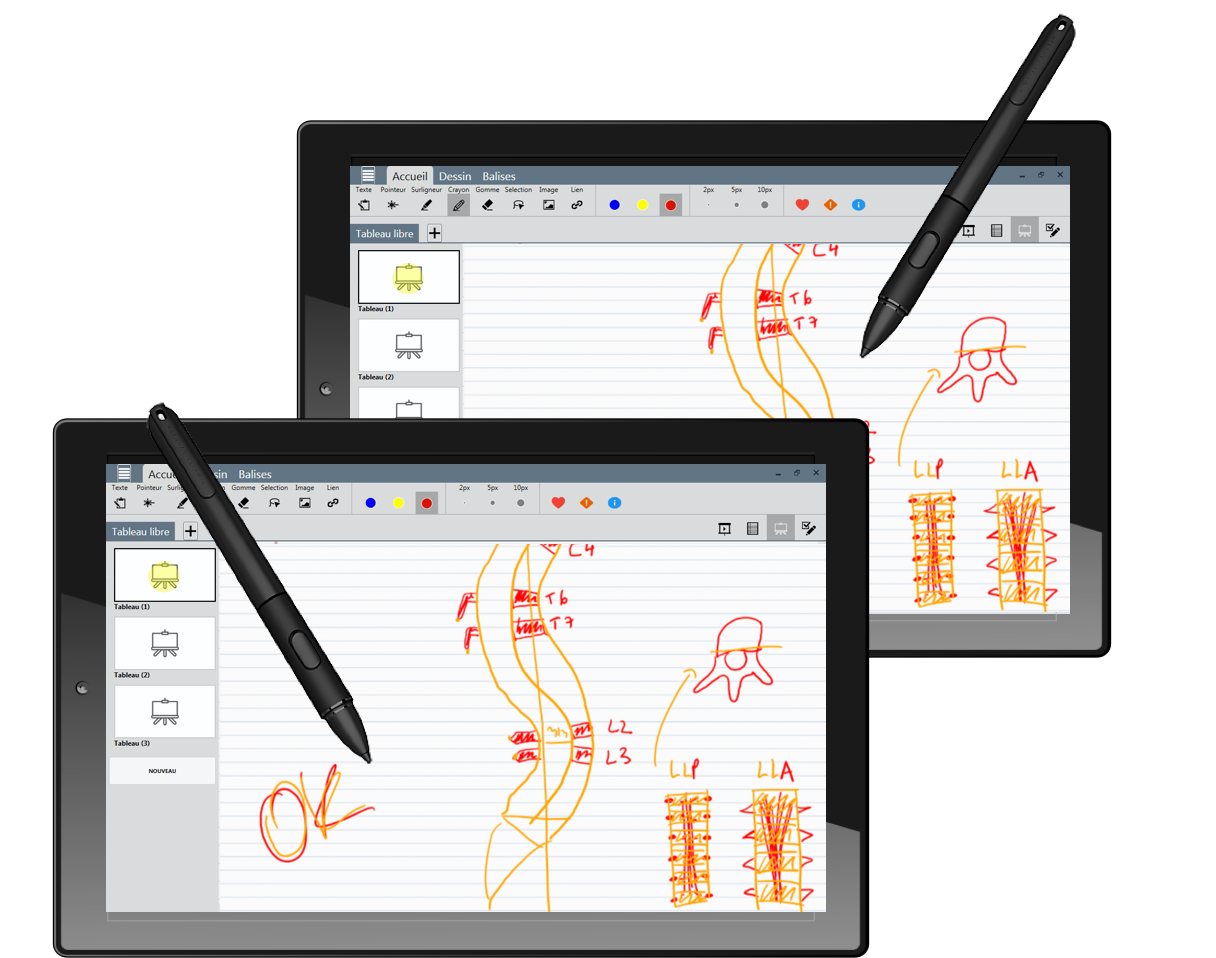 Study 5: Knowledge testing (e.g. quizzes or multiple-choice questions) can serve summative assessment purposes, and has also proved to be a powerful learning tool (for recent reviews, see Dunlosky, Rawson, Marsh, Nathan, & Willingham, 2013; Rowland, 2014). Testing leads learners to engage in an information retrieval process-a mechanism that enhances subsequent retention (direct testing effect). Testing has also been proved to have indirect effects on learning (i.e. improvement in learning strategies), particularly when feedback is used conjointly. In this study, a group of 21 students underwent multiple practice tests with KASSIS (traditional or graphic quizzes) during a lecture on UX design, whereas the control group (n = 21) only underwent these tests at the end of the lecture. Results showed that, compared with controls, students in the regular practice testing group performed better on a learning questionnaire, but only for content tested during the lecture. No effect on comprehension or other course elements was observed. In both groups, quizzes were generally highly appreciated by students.

Study 5b (in progress): A similar study is currently underway at INSA Rennes with 67computer science students. The aim is to replicate our previous findings but also to analyze the effect of regular quizzes on note-taking behaviors, by analyzing the notes collected by the dashboard. Another goal of this study is to test the final version of KASSIS for this project.

Study 6: The aim of this study was to optimize an interactive learning method (peer instruction) used in higher education, by applying the KASSIS solution. Students answered a series of questions twice, once before and once after peer discussion. We examined the effects of guidance from the teacher in the form of graphic quizzes (instead of multiple-choice questions) and collective feedback delivered to the whole class in a novel heatmap format (instead of bar charts). The students attended a course on using the open-source Behavioral Observation Research Interactive Software (BORIS) for coding behavioral observations of team members. After two training sessions, a two-hour evaluation session was held to reinforce the students’ knowledge of the software. This session was based on peer instruction, and consisted of a series of graphic quizzes featuring screenshots of the software interface. They had to answer the quizzes, presented one by one on the tablets, using the stylus to circle or highlight the correct answer. In the experimental condition, and after the first answer to a question had been given, the teacher told the students that the answer indicated by the heatmap would not necessarily be the correct one. This information was not given to students in the control condition (see figure below).

Results showed that the guided students were less likely than the nonguided students to change their answers to conform to the majority view, especially when it was incorrect. They failed to reveal a significant difference between groups on overall learning gain. However, a further analysis of the learning gain when both members of a dyad gave the same answer after discussion revealed that the learning gain of students who were guided by the teacher was 35%, compared with 25% for those who were not guided. These results suggest that the way the teacher guides students in their use of a heatmap may have a crucial impact on the quality of learning in peer instruction, preventing them from simply conforming to the majority view. As recommended by the reviewers of a submitted paper, an extension of this study is planned, featuring the addition of a control condition where no collective feedback is delivered by the teacher after students have given their first answer to a question. 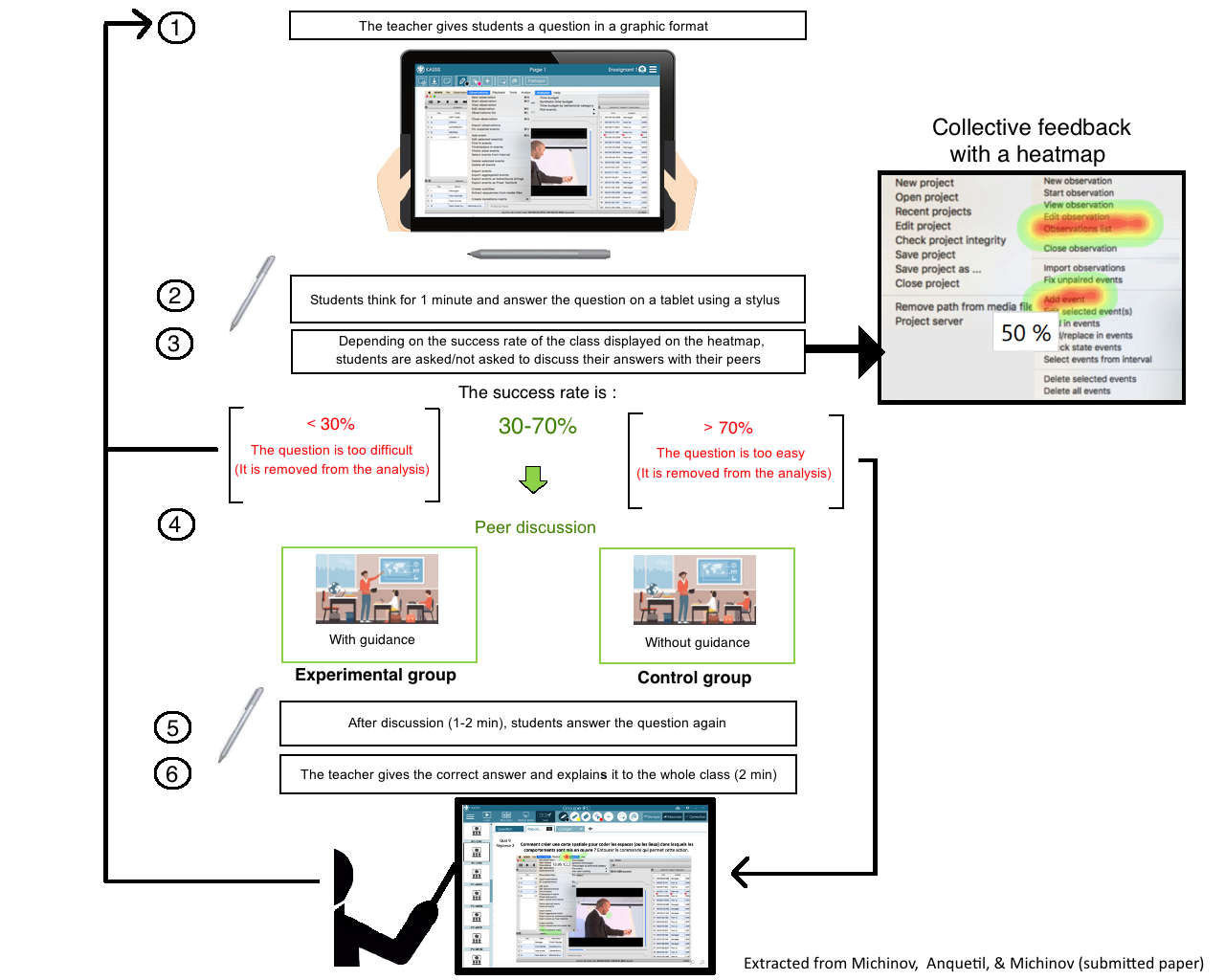 Study 8: To verify the benefits of interactive teaching, we compared a lecture where KASSIS was used to administer graphic quizzes on tablet with a stylus and the same lecture delivered in a traditional way with the same paper-and-pencil graphic quizzes administered on PowerPoint slides. Social psychology undergraduates were randomly divided into two groups: an experimental group (n = 172, 5 classes; interactive teaching), and a control group (n = 213, 6 classes; traditional teaching). For 2 hours, students attended a lecture on the principles of sociometry and methods for measuring social relationships, drawing sociograms and interpreting them, before responding to a series of graphic quizzes. Collective feedback was only given in the interactive teaching group (see figure below).

Illustration of heatmaps of thumbnails using in the sociometry course

Academic performance (score on end-of-semester sociometry exam ranging from 0 to 2) and self-reported satisfaction (questionnaire items rated on 7-point Likert scale) were the main measures of this study. Results of initial analyses revealed no difference between interactive and traditional teaching on academic performance. By contrast, students provided higher ratings after the interactive teaching than after the traditional teaching on overall satisfaction, engagement and interest in the lecture, and understanding and mastery of concepts. By contrast, no difference was found on the relevance of the course content and easiness of following the lecture. Additional statistical analyses are in progress.