A 4-page PDF document is available as a summary report of the project.

Asymmetric (or public key) cryptography is used for key exchange/agreement (for sharing a common secret key in symmetric cryptosystems), in authentication primitives (of messages, devices, users) and specific cyphering schemes. Asymmetric cryptography was performed using RSA over a long period. But due to works in cryptanalysis and efficient parallel implementations, the size of RSA parameters must increase of lot. For instance, today at least 2048 bits keys, modulus and internal operands are recommended for RSA.

Elliptic curve based cryptography (ECC) was adopted during the last two decades as an efficient alternative to RSA. For instance, ECC requires computations over 256 bits values to acheive a similar security level than RSA with 2048 bits. More recenlty, hyper-elliptic curve cryptography (HECC) was proposed as a more advanced solution compared to ECC with more efficient computations for the same security level.

In HAH project, we study and propose hardware architectures for recent HECC solutions and their FPGA implementations. We study and evaluate the impact of various architecture parameters on the cost and performances: type, size and number of units (arithmetic, memory, internal communications); architecture topology; and exploitation of internal parallelism and security against side channel attacks. We also provide open source code for our hardware (some arithmetic units and accelerator) and software tools (for hardware units generation).

Hardware cryptographic accelerators require efficient arithmetic units over finite fields (128-bit prime ones in this project). The most common and costly finite field operation in HECC is the modular multiplication (MM). Most of MM algorithms over prime fields are derived from Montgomery algorithm. They improve efficiency by interleaving partial products generation and modular reduction steps to reduce the width of intermediate data and to gain some speedup. Over prime fields (denoted Fp or GF(p)), it uses dependent partial products and reduction steps. These dependencies make FPGA implementations with fully pipelined DSP blocks difficult to optimize. We propose a new multiplier architecture with hyper-threading capabilities. Several independent multiplications are handled in parallel for efficiently filling the pipeline and overlapping internal latencies by independent computations. It increases the silicon efficiency and leads to a better area / computation time trade-off than current state of the art of efficient modular Fp multipliers operators.

We propose a new of hardware unit called hyper-threaded modular multiplier (HTMM) to improve efficiency in small hardware units where the modulo p can be selected without constraint at design time. It roughly consists in interleaving independent multiplications in the same hardware resource to fill the pipeline as much as possible. HTMM can be seen as multiple logical multipliers sharing the same physical resource (like in hyperthreaded processors). As illustrated in Figure 2, several couples of operands (A(i) and B(i)) enter successively in the operators. The iterations for the various multiplications are interleaved in the operator. At the end of each internal multiplication (after s iterations), the result product P(i) is available on the output port of the operator.

The number of “tokens” for independent operations (3 in Figure 2) is determined using algorithms and FPGA parameters to provide very high usage of major internal hardware resources. As the number of parameters is important and they have very different impact of the best type of architecture, we designed a software generator for HTMM. Based on a small set of parameters and optimization directives, it generates synthezisable VHDL descriptions for various HTMM operators and optimizations targets. Figure 3 presents an example of HTMM for 128-bit finite field with a generic p modulo and 3 independent products in parallel for Xilinx FPGAs.

Table 1 reports some results for comparison with the best state of the art multiplier used for ECC (we implemented the multiplier published in article at SAC2013, denoted [6], on the same FPGAs). We implemented 2 HTMM versions on 3 different Xilinx FPGAs: Virtex 5 XC5LX110T (V5), Virtex 4 XC4VLX100 (V4) and Spartan 6 XC6SLX75 (S6). Version HTMM BRAM uses dedicated hardware RAM blocks (BRAMs) to store the 3 pairs of operands. Version HTMM DRAM uses distributed memory in programmable LUTs (lookup tables) of logic slices to store the operands and all intermediate values (no block RAM). All the results are given for providing 3 products (in a hyper-threaded way for HTMM and in a sequential and pipelined way for [6]).

We propose hardware accelerators for scalar multiplication HECC based on Kummer surfaces from recent literature. We study and evaluate the impact of various architecture parameters on the cost and performances: type, size and number of units (arithmetic, memory, internal communications); architecture topology; and exploitation of internal parallelism. Several architectures have been designed and implemented on different FPGAs for various parameters, and compared in terms of area and computation time. Our accelerators are designed with internal protections against side channel attacks.

A paper presented at CHES 2016 by Rennes et al. (see Links below) proposed a new Kummer-based HECC (KHECC) solution and its implementation on microcontrollers with 30 to 70 % clock cycles count reduction compared to the best similar curve based solutions at equivalent security level. In HAH, we proposed the first hardware architectures for scalar multiplication in KHECC adapted from this paper their FPGA implementations.

We study and evaluate the impact of various architecture parameters on the cost and performances: type, size and number of units (arithmetic, memory, internal communications); architecture topology; and exploitation of internal parallelism.

We explored several configuration of the internal width (w) of the units and internal communications. The field width is 128 bits with prime p=2127-1.

Types of Resources in our Architectures

There are several types of resources in our hardware accelerators:

We selected 4 architectures summarized below and fully implemented them in VHDL on several FPGAs: 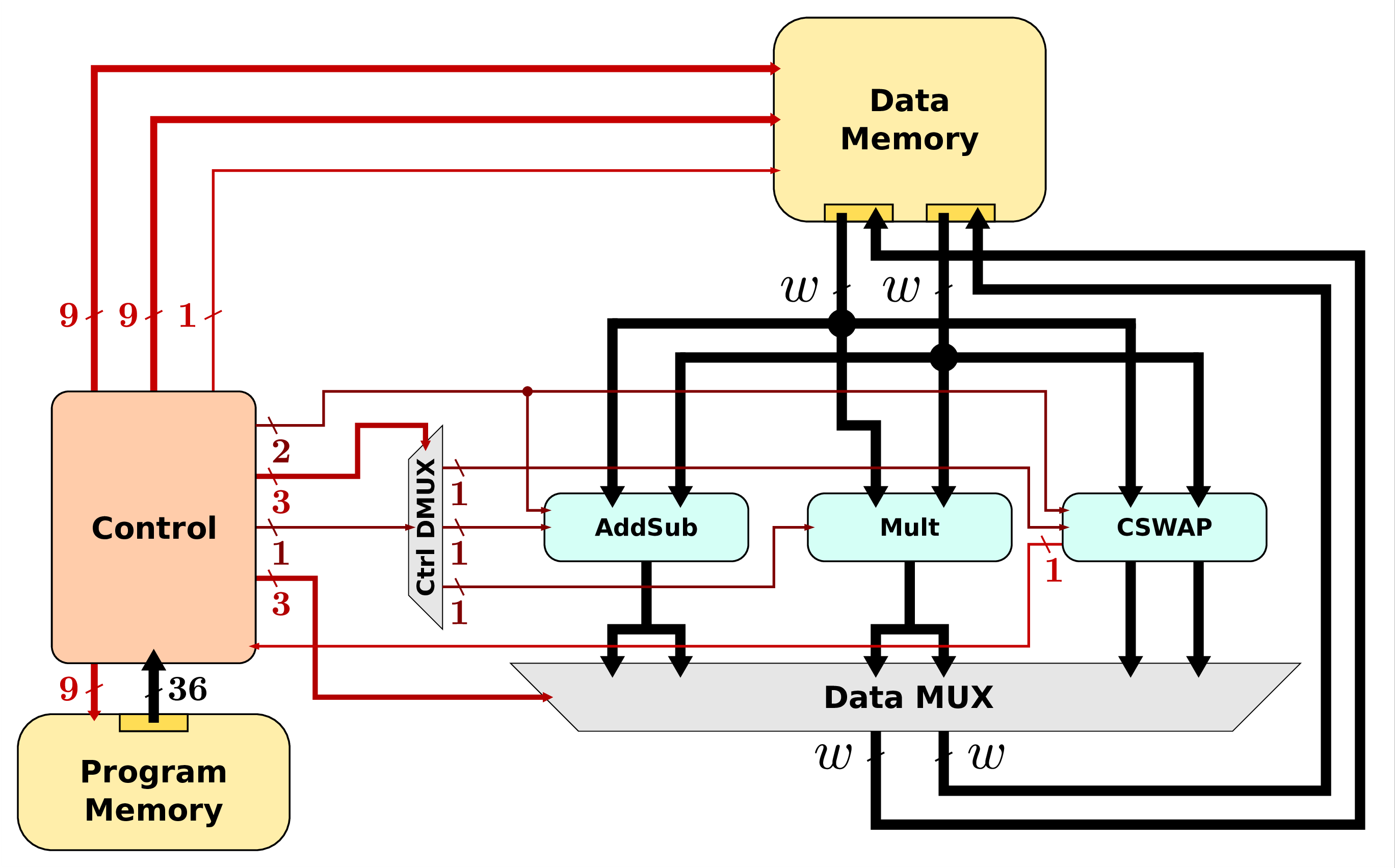 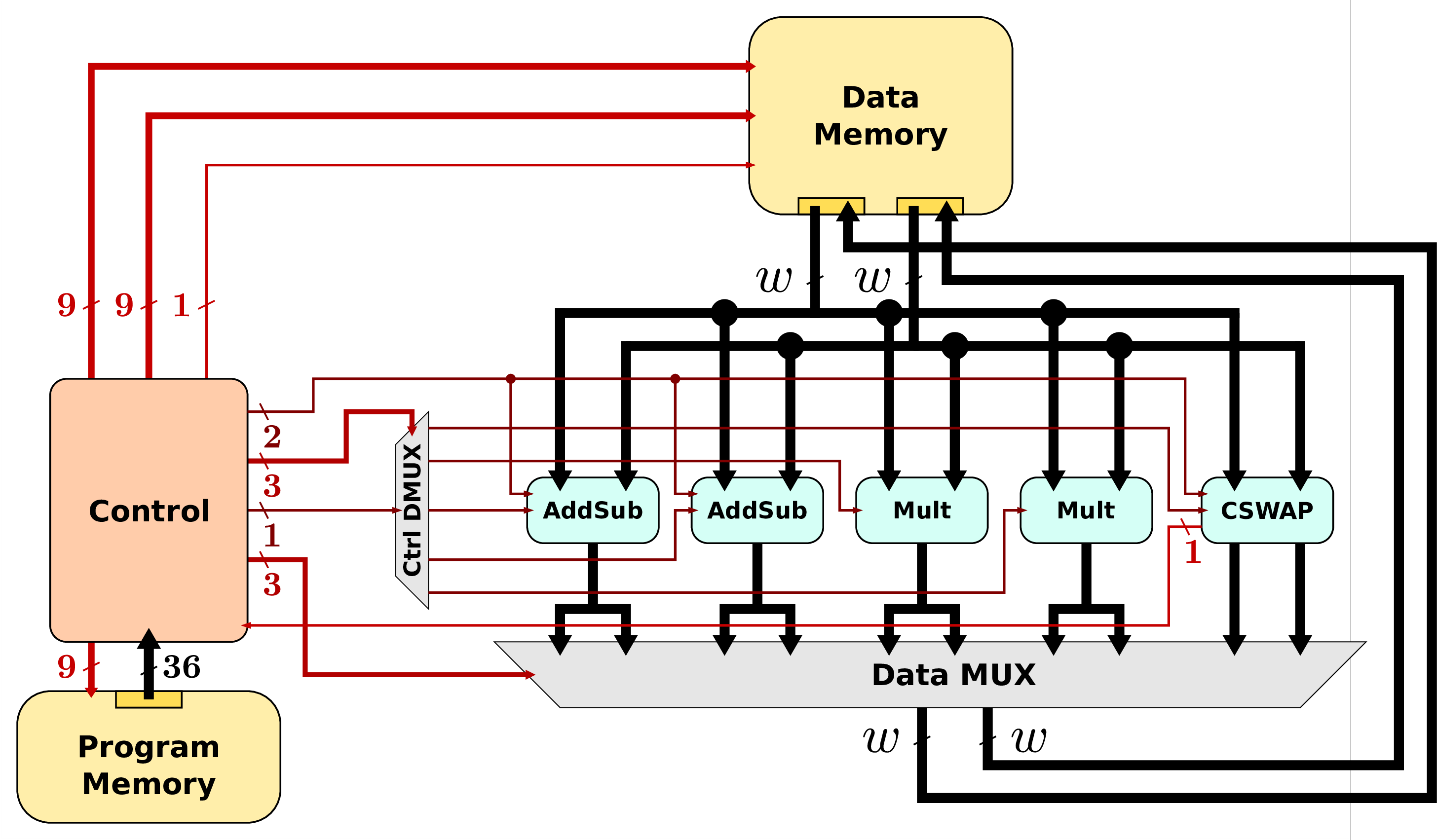 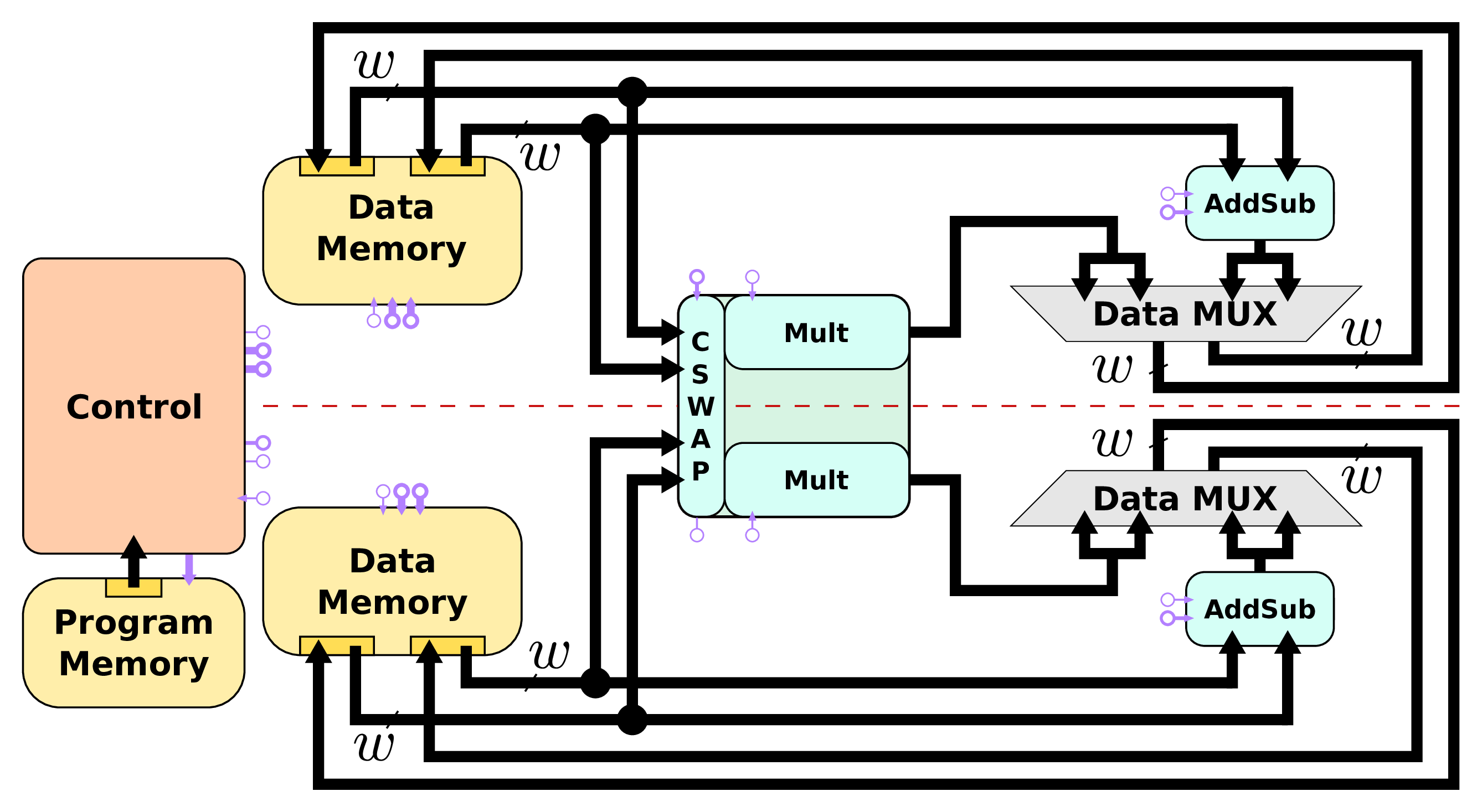 The best configuration depends on theobjective (high speed or low area) and target FPGA. Then exploration toolsat architecture level are helpful for designers and users.

The obtained results lead to similar speed than the best curve based solutions for embedded systems but with an area almost divided by 2 (-40 % for DSP and RAM blocks and -60 % for logic slices).

PhD Theses from the project

We plan to work on more complex architectures for HECC with randomization schemes of the operation flow (for instance commutativity, associativity and distributivity rules can be applied). The internal parallelism in the HECC operation flow may allow us to randomly perform some operations. This should help to frequently change the measured traces during physical attacks (power consumption, timings, electromagnetic emanations). In HAH we used uniform and a constant time algorithm for scalar multiplication (Montgomery Ladder), we plan to compare it with randomized solutions.

In HAH we mainly focused on phyiscal attacks based on observations of side channels. We would like to study protections against fault injection. Then one problem araises. How should be add operations for fault detection in such a way this protection against fault attacks do not increase the vulnerability against observation attacks?