The role of the Transmitarray Antenna (TA) is to focus the radiation energy in one direction by transforming a spherical wave into a plane wave. It’s composed of unit-cells allowing controlling the phase shift of the electromagnetic wave (Figure 1).

The phase shift distribution is optimized by using discrete phase shift value. To obtain good performance, 8 values (each 45°) has been chosen.

The Figure 2 shows the phase shift distribution obtained in the case of an unifocal transmitarray.

The transmitarray antenna has been tested and validated from radiation pattern measurement. The primary source is the 2X2 patch array presented in M5HESTIA 60GHz-FI downconverter part.

The beam scanning is obtained by moving the primary source.

The Radiation pattern of the unifocal TA in H-plane at 60 GHz is presented on Figure 6. Unifocal means that the phase error in the aperture is minimum for one primary source position (usually at the centre corresponding to a 0° beam direction).

To improve the beam scanning performance, the principle is to design a multi-focal transmitarray antenna. Usually two symmetric primary source position are defined where the phase error will be minimized (figure). In our case, the focal position corresponds to a 33° beam direction.

Figure 7: radiation pattern of the bifocal TA antenna in H-plane at 60 GHz

Figure 8: Gain antenna and comparison of the scan losses for unifocal and bifocal TA

In the case of a scan in both plane (azimuthal and elevation), it’s possible to design a quadrifocal TA (figure 9). 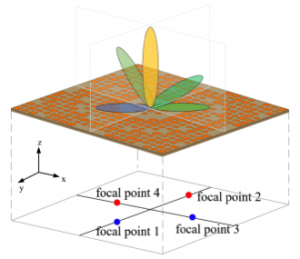 Figure 10: Comparison simulation- measurement of the radiation pattern of the quadrifocal TA

Figure 11: Measurement of the radiation pattern of the quadrifocal TA

The angular range with scan losses below 2dB are respectively of 40° for the unifocal TA and 60° for the quadrifocal TA.