One first track of contributions in the project was to elaborate about the expected performance of large-scale MIMO systems when deployed at mmWaves. New analyses were needed by integrating the specificities of the wave propagation at these frequencies, namely spatial cluster-based propagation and strongly LoS dominated channels. 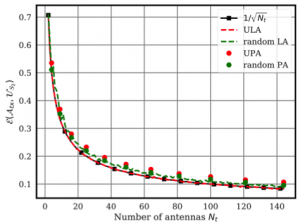 In a multiple-input-multiple-output (MIMO) communication system, the multipath fading is averaged over radio links. This well-known channel hardening phenomenon plays a central role in the design of massive MIMO systems. We have studied the channel hardening effect using a physical channel model in which the influences of propagation rays and antenna array topologies are highlighted. A measure of channel hardening has been derived through the coefficient of variation of the channel gain. Our analyses and closed form results based on the used physical model are consistent with those of the literature relying on more abstract Rayleigh fading models, but offer further insights on the relationship with channel characteristics, and especially at mmWaves. In particular, as seen in Fig. 1, one can predict the hardening effect depending on the number of antennas and the shape of the antenna array (Uniform Linear Array, Uniforma Planar Array, etc.)

One crucial theoretical result has been obtained concerning the so-called Beamsteering precoding scheme. Analog Beamsteering (ABS) has emerged as a low complexity and power efficient solution for Millimeter-Wave (mmWave) massive Multiple Input Multiple Output (Massive-MIMO) systems. Driven by the ability to exploit the low spatial correlation between the user terminals when a high number of transmit antennas is available at the Base Station, ABS can be used to support Multi User (MU) MIMO scenarios instead of digital or Hybrid Beamforming (HBF) approaches. We have analytically characterized the Spectral Efficiency (SE) of MU-Massive-MIMO systems relying on ABS and theoretically defined the asymptotic saturation level of the SE at high SNR (Fig. 2a). On the other hand, we have provided tight theoretical approximations for the SE of the system when implementing HBF with ABS at the analog stage and Zero Forcing (ZF) precoding at the digital layer (Fig. 2b).

One major limitation of implementing massive MIMO systems in mmWaves comes from the fact that they suffer from high hardware complexity and power consumption. Analog beamforming is considered as one suitable approach for practical implementation of such systems, relaxing the hardware and power consumption requirements compared to full digital beamforming solution. Moreover, hybrid beamforming solutions emerged as an attractive solution that can capture the trade-off between digital and analog ones. We have mathematically showed that in pure Line of Sight (LoS) channels, using hybrid beamforming with Zero Forcing (ZF) at the baseband can achieve equivalent Spectral Efficiency (SE) compared to the full digital ZF precoding, with lower hardware complexity, and lower power consumption. Moreover, we have validated the equivalence in SE performance between hybrid ZF and digital ZF by simulation results (see Fig. 3).