Aerial robots meet many industrial needs, but their gripping capacity, reduced to a metal clip, is not adapted to complex objects. The MAMBO project offers a new solution: a soft gripper, composed of a soft body that can withstand a large deformation and thus adapt to any object shape (Figure 1). Lightweight, soft gripper can be larger and have no impact on the autonomy of drones.

The MAMBO project will be coordinated by Abdelhamid Chriette (ARMEN, LS2N). 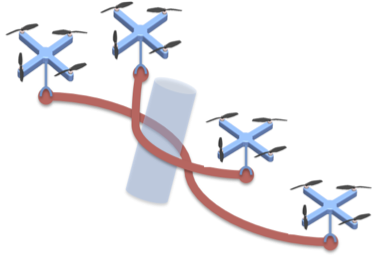 Industry’s expectations for the performance of industrial robots are constantly increasing. To be efficient, the industry will increasingly need adaptable robots, able to perceive their environment, easy to program, reconfigurable and mobile, interconnected and having a very large workspace. Aerial robotics, which has experienced significant growth for many years, has the potential to answer many of these requirements. However, to be able to tackle the industrial needs, researchers on aerial robots must still solve many issues, one of them being the ability for the aerial robot to grasp any type of object. The aerial manipulation has become a robotics research field that proposes the integration of one or more robotic arms in multirotors, for allowing the manipulator(s) to perform certain operations in workspaces at high altitude or in areas out of the reach of standard fixed-based or mobile (but grounded) manipulator arms. Possible applications span many areas such as disaster response, maintenance of infrastructure, inspection of remote sites. However, aerial manipulation is a real challenge when considering that the gripping function is still one of the most complex to achieve even by classical robotic systems (e.g., fixed-base manipulators).

The most basic approach to obtain an aerial robot with the ability to grasp an object is simply to attach a gripper under the aerial vehicle. This is most often not satisfactory because handling capabilities remain limited due to the under-actuation of drones. A second approach is to add a multi-dof manipulator arm on the vehicle, a parallel manipulator, a surface or a net carried by multiple quadrotors, or even the body of the multirotor that may become the manipulator itself. This second approach offers better handling capabilities but accentuates the problem of on- board loading (being the typical payload of aerial robots very limited). These two approaches could be valuable for small size objects, but are totally inadequate for objects of larger size. In this case, a possible third approach consists in using several drones connected to an object via cables. This would indeed allow grasping large objects but managing the complex dynamics (and possible entanglements) of the cables/drones/object is highly challenging, and the action of an operator would still be necessary for hanging the cables to the object.

In order to grasp an object of large dimension, instead of using a big-size drone equipped with a gripper, which is a very costly solution, an alternative is to create a big-size gripper attached to several drones (Figure 2). The mechanism proposed in, is a first step towards the aerial grasping of large objects. However, it is designed for objects of spherical or cylindrical shapes and would hardly adapt to more complex objects. 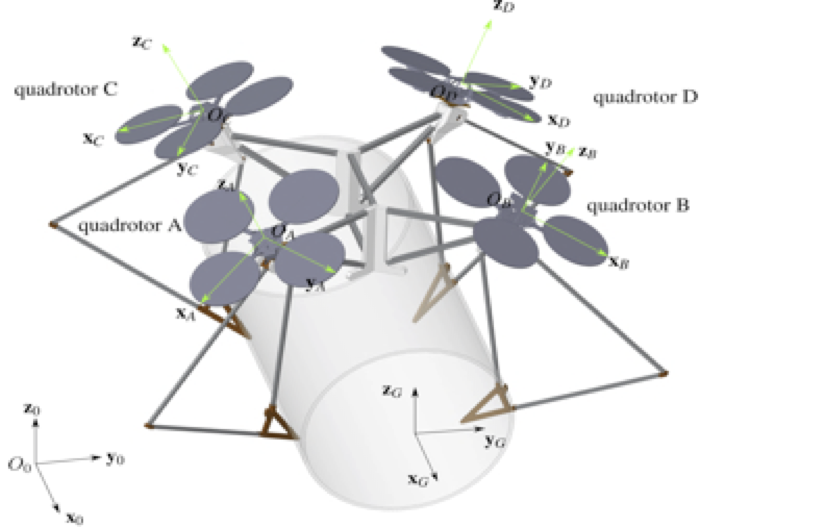 oft bodies), which have the ability to adapt themselves to any shape of the objects, thus allowing for the possibility of designing universal grippers. This idea is of interest in the context of the aerial grasping: (a) soft bodies are very lightweight, thus having less impact on the drone autonomy than a standard gripper, (b) their low weight allows the design of grippers of bigger size, thus being able to grasp bigger size objects, and (c) they can adapt to any kind of objects and shapes, thus improving the robustness of the grasp in case inaccurate positioning of the drone occur and this is what we want to propose as a scientific and technological solution in the MAMBO project (Figure 1).

However, soft grippers come with their own challenges. Being able to create and control such kind of gripper is indeed a long-term goal because of the many issues one is faced with, among which: the study of the grasping stability, the control and perception of the internal deformation of the gripper, the control of the system {drones+gripper+object}, and so on.

Therefore, in MAMBO, we propose to work on the first elementary bricks, which corresponds to the manipulation of a single soft body (a slender beam) by the combined action of two drones equipped with onboard cameras and force sensors at the gripper locations (Figure 3). The scientific developments associated with this goal are the first elementary developments necessary in order to attain this promising grasping strategy.