This application of our rational approximation methods to orthogonal wavelets was proposed by R. Peeters (Maastricht University).
The problem is to implement wavelets in analog circuits in view of medical signal processing applications. A dedicated method has been developed based on an L2-approximation of the wavelet by the impulse response of a stable, causal, low order filter:
Joël M.H. Karel, A wavelet approach to cardiac signal processing for low-power hardware applications, PhD Thesis (2009).
However, this method fails to find an accurate and sufficiently small order approximation in some difficult cases (Daubechies wavelets db7 and db3).

The idea was to use the software RARL2 to perform a model reduction on an accurate high order (100-200) approximation. However, an admissibility condition for wavelets is that the integral of a wavelet equals zero, which means that it has a vanishing moment of order 0. The low order approximation is still required to have an integral zero, otherwise undesired bias will show up when the wavelet is used in an application. We thus had to adapt a version of the RARL2 software to address this constraint. Since we are dealing with a quadratic optimization problem under a linear constraint, this can be solved analytically. We could thus reformulate the problem of L2-approximation subject to this constraint into an optimization problem over the class of lossless systems. This could be handled by the software with only minor changes and we were able to perform an accurate approximation of order 8 for db7. 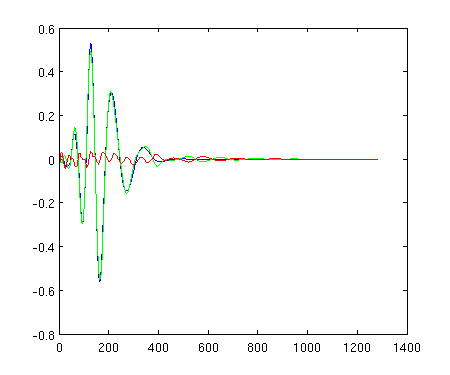