As in almost all areas of engineering in the past several decades, the design of computer and network systems has been aimed at delivering maximal performance without regarding to the energy efficiency or the percentage of resource utilization. The only places where this tendency was questioned were battery-operated devices (such as laptops and smartphones) for which the users accept limited (but reasonable) performance in exchange for longer use periods. Even though the end users make such decisions on a daily basis by checking their own devices, they have no way of minimizing their energy footprint (or conversely, optimize the network resource usage) in the supporting infrastructure. Thus, the current way of dimensioning and operating the infrastructure supporting the user services, such as cellular networks and data centers, is to dimension for peak usage. The problem with this approach is that usage is rarely at its peak. The overprovisioned systems are also aimed at delivering maximal performance, with energy efficiency being considered as something desired, but non-essential. This project aims at making the network energy consumption proportional to the actual charge of this network (in terms of number of served users, or requested bandwidth). An energy proportional network can be designed by taking intelligent decisions (based on various constraints and metrics) into the network such as switching on and off network components in order to adapt the energy consumption to the user needs. This concept can be summarized under the general term of Green Cognitive Network Approach. 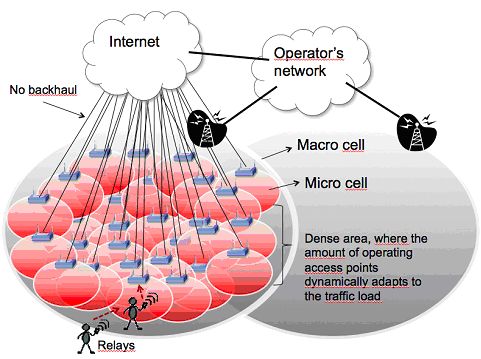