Radiotherapy is one of the major treatments for cancer, which may be also combined with chemotherapy ( as concomitant and/or adjuvent treatment) and surgery (before or after radiation delivery). The main goal in radiotherapy is to deliver a high amount of dose to the tumor while sparing the nearby organs at risk (OAR) and surrounding healthy tissues thereby limiting side effects (known as toxicity events). The accuracy of the current dose delivery systems (linear accelerators, LINAC) is increasingly improving and they are nowadays able to deliver highly concentrated and conformal dose to complex and sometimes moving targets in real time. Intensity Modulated Radiotherapy (IMRT) [1] is the reference conformal radiotherapy technique which has improved the dose delivery reaching complex tumor shapes. However, several issues are still to be tackled especially regarding the customization of the treatment by introducing individual specificities with the goal of improving local tumor control and decreasing toxicity.

A typical radiotherapy treatment consists of two main steps: i) a planning step, in which a dose distribution is generated from the delineations of tumor target and OARs from 3D images acquired at a pre-treament step and ii) a delivery step, in which the tumor is irradiated at a daily basis during 6 to 8 weeks according to the planned dose. Although the planning may be based on multimodal 3D images (morphological Computed Tomography (CT) for dosimetry calculations as well as anatomico-functional Positron Emission Tomography (PET)/CT/ Magnetic Resonance Imaging (MRI) for the definition of targets) [23,24], the integration of  multiple imaging sources is a challenging issue which has not been fully adressed yet. Nowadays, the planning dose is computed from delineations in the CT and completed through the optimization of several parameters defining the optimal conformal ballistic configuration of IMRT [1]. Those parameters are far from being tailored to the individuals’ specificities. Concerning the dose delivery step, modern systems tend to use intraoperative images for guiding the dose delivery with the aim of better fitting the dose plan to the real anatomy. This strategy is known as Image Guided Radiotherapy (IGRT) [12,13]. In the current practice, the planning step is nonetheless performed only once before the actual dose delivery but neither correction nor slight adaptation is done during the treatment to take into account organs displacements or according to the tissues/tumor response to the radiation.

Such adaptation would be of interest in order to take into account the functional and morphological changes of both tumor target and OARs during the course of treatment. Considering the high accuracy of the current delivery systems, there is an increased need for effective patient-specific clinical protocols allowing the deliverance of the adequate dose to the patient’s tumor, sparing the healthy tissues and taking into account both anatomical and functional variations occuring during treatment [1][31]. A customized or adaptive image guided radiotherapy (IGRT) [14,15] may take advantge of a large amount of information from different sources available before and during the treatment [32], to be adapted to individuals specificities.

In tomorrow’s radiotherapy an efficient IMRT planning will imply the predictive  knowledge of the overall response to therapy for both the local tumor control and side effects, due not only to the dose-volume relationships but also to the patient’s specificities. Those specific predictive models of toxicity and failure may be integrated within the planning step with regards to a given patient [11,24] and may in turn lead to the definition of a more efficient personalized and adaptive IMRT (A-IMRT) approach.

Devising accurate predicitve models within this clinical setting is a challenging task which requires innovative approaches in several complementary fields of knowledge and expertise. Firstly, predictive models may be statistically built through the understanding of toxicity and failure patterns across a population treated for cancer and with follow up information [6]. Secondly, these models should also address the identification of sub-volumes within the tumor/healthy organs which are likely responsible for the recurrence/side-effect events [33]. Thirdly, most of the treatment planning systems calculating 3D dose distributions suffer from less than optimal accuracy due to analytical computation without explicit Monte Carlo simulations [35]. Fourthly, Pradiictive models should consider not only the planned and delivered dose but also the individual’s specificities (medical history, clinical exams, genotypice, biomarkers, ect.) and concomitant treaments (chemotherapy), which may differ across a population and are merely considered today [34]. Finally, predictive competitive models could also help in determining an optimal (local control vs. toxicity) trade off within the treatment.

The proposed project aims at optimizing patient management in radiotherapy by developing new predictive models for both tumor control and associated toxicity. This step is crucial in improving patient outcome by their integration within the radiotherapy inverse planning step. The main contribution lies therefore in the integration of multiple sources of information (population analysis, dose tumor simulation and individuals data) to build patient-specific predictive models, thus proposing a new prediction-based A-IMRT framework to personalize the treatment. The originality is simultaneously brought about by the whole framework itself but also by the methodological contributions which appears in several tasks: new normal tissue complication probability predictive models, new tissue characterization methods from multimodal data, and new dose/tumor simulation environments.

2. Description of the project and tasks

As depicted in Figure 1, the main axis of development within this project will be the adaptive radiotherapy, a breakthrough from predictive models towards a personalized treatment. Three steps can be clearly identified: 1) population analysis; 2) modeling and simulation and 3) integration of the individuals’ specificities. On the one hand they address the prediction of tumor control; on the other hand they cope with the prediction of associated OAR toxicity. They will be both integrated within the proposed inverse A-IMRT planning framework.

The project will be developed in four different tasks (T1-T4). T1 and T3 will concern the prediction of tumor response, T2 will deal with the toxicity models and T4 will tackle both local tumor control and toxicity. 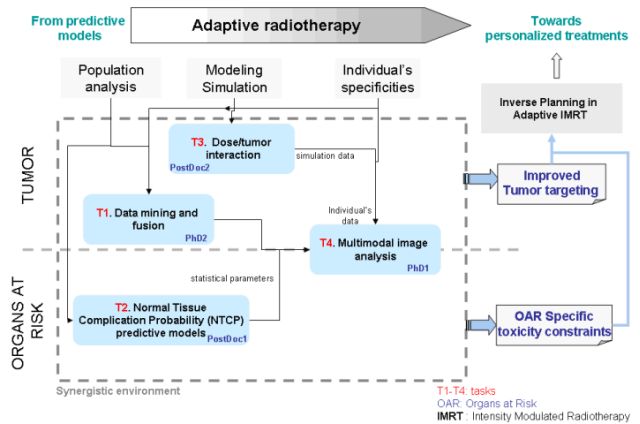 Figure 1. From statistical predictive models towards personalized radiotherapy treatments. Integration of different informations, interaction and description of tasks for achieving a customized therapy.

The research worksconducted in the LTSI (Inserm Laboratory composed of five teamsSESAME, SEPIA, METRIQ, IMPACT and MEDICIS) are focused on some majordiseases with an important industrial spin-off. They lie at theinterface of Medicine, Information Technologies and CommunicationSciences and Integrative Physiology, where modeling plays anessential role. The mainstay of these researches is the kernel”signal-model-image” in which each component has its owndynamics, but where their combined contribution yields an essentialgain. Research themes on which LTSI had engaged, such as model-basedinformation processing and decision making, multiscale/multilevelcomplex systems modeling, inverse problems with incompletebiophysical observations, and multidimensional/multimodal nonlineardata decomposition, constitute today major fields of research. LTSIpursues these themes and extends its model-based activities toinclude “in-vivo” and “in vitro” experimental work.

The LaTIM is an INSERM research unit associating the Universityof Brest and its Faculty of Medicine, Telecom Bretagne (engineeringschool) and the University Hospital of Brest. Its research is led according tothree themes: Computer Assisted Surgery for Orthopedics, QuantitativeMultimodal Imaging for diagnosis and therapy and Multimedia MedicalInformation Indexing, Tracking and Integrity. These three themes areintegrated within a methodological approach of the diagnostic andtherapeutic imaging based on information and knowledge

Statut:PhD Student (Development of multivariate statistical models for the prediction of toxicity)

2. O. Acosta, et al. Atlas based segmentation and mapping of organs at risk from planning CT for the development of voxel-wise predictive models of toxicity in prostate radiotherapy. In MICCAI Prostate Cancer Imaging Workshop 2010, LNCS6367: pp.42-51.

19. A. Le Maitre, et al. Incorporating Patient-Specific Variability in the Simulation of Realistic Whole-Body 18F-FDG Distributions for Oncology Applications. Proceedings of the IEEE 2009;9(12):2026-2038.