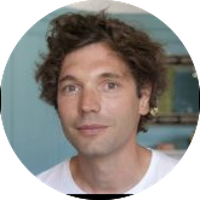 We present an empirical large-scale study about the structure of online French media. We propose a multi-layer model that connects media dynamics at two different levels. The first layer is made of every media producing information online. More precisely, journalists and bloggers cite each other producing a hyperlink network between media outlets. The overall structure of the system is surprisingly stable showing proximity and gaps between different sub-areas. It provides a clear distinction between the central media space (with its slight ideological polarization), the peripheral ring around the central media space (with greater ideological distances between media outlets) and an informational counter-space that hosts peripheral and very ideological media. Strategies of disinformation and manipulation of opinion are clearly produced and deployed from this counter-space. The second layer is composed of tweets citing articles published on one of the 400 websites that composes the corpus. Network analysis and natural language processing are instrumental to understand the circulation of news in the digital public space.