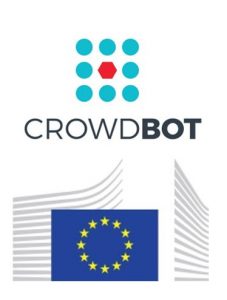 CrowdBot is a European Union Horizon 2020 (EU H2020) project about “Safe Navigation of Robots in Dense Human Crowds”. The name “CrowdBot” is an amalgam of human “crowd” and machine “bot.” In CrowdBot we aim to equip robots with tools and algorithms to navigate in crowded areas either autonomously or by using shared-control

Today’s robots are programmed to stop when getting too close to a human or an obstacle, in order to avoid collisions. However, this prevents robots from entering densely frequented areas and performing effectively in these high dynamic environments.

CrowdBot gathers the required expertise from 7 industrial and academic partners to develop new robot capabilities: RWTH work on sensing abilities to estimate the crowd motion around the robot. At Inria research center in Rennes, we improve cognitive abilities for the robot to predict the short term evolution of the crowd state. Our team also develop a tool of crowd simulation. A team from ETHZ university is developing the navigation module of the robots to perform safe motion at close range from people. And EPFL is responsible for developing the “Reactive Navigation” so that the robot take the right decision if there is a present or imminent collision and to predict pedestrian behavior after collisions.

At the same time, the other partners develop or design 4 different robotic platforms for this project:

In Crowdbot ,we consider three realistic scenarios that might generate ethical and safety concerns which this project addresses through a dedicated Ethical and Safety Advisory Board that will design guidelines for robots engaging in interaction in crowded environments:

More information can be found on the CrowdBot website.