Human-robot interaction, often referred as HRI in the scientific community, is the study of interactions between humans and robots.
In particular, this field is about having robots communicating their actions to humans they want to interact with, while interpreting humans intentions.
Since this thematic is about understanding how humans communicates between each other and defining how robots should behave with humans using humans-like communication, HRI takes its origin in psychology and literature (science fiction) even before any robot exists.

In the context of the CROWBOT project, our team focus on the implication of mobile robots moving with humans, all together as a crowd.Given specific scenarios (type of crowd, environment, robot), we try to answer the question:
Is our robot harmless for the crowd and efficient moving this way? 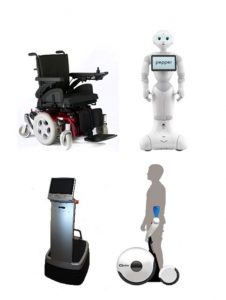