Adaptive systems allow to model dynamic systems that adapt to their environment. They are composed by static programs and by transitions between these programs.These programs often have some common elements. Instead of keeping them separated they can be grouped, and their differences are model by sets of features. These features may be modified at runtime through a reconfiguration process.

Feature expressions are used to identify sets of features that enable or disable some behaviors in the model.

In order to model adaptive systems with real time behaviors we have introduced in [CLST13] a model of Featured Timed Game Automaton. The model extends Timed Automata with features and introduces a notion of controllability that distinguishes the transition from the system from the ones of the environment. In PyECDAR Time Input/Output Automata are extended similarly with features. An example of FTGA is presented in the figure below, and further analysed with PyECDAR during the tutorial. 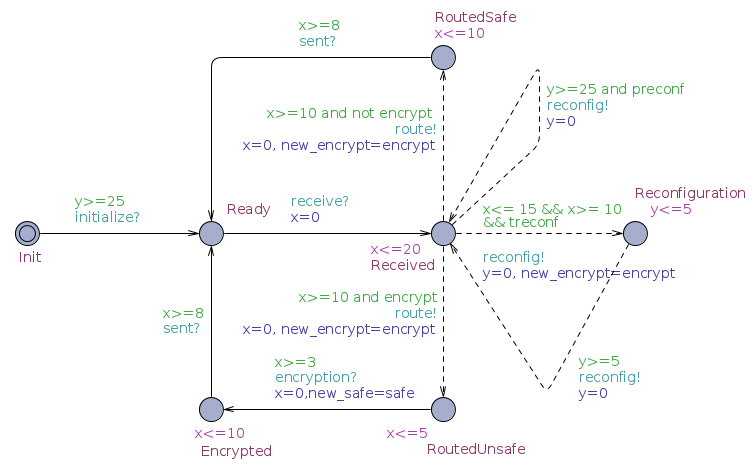 FTGA are provided with a game semantics similar to the one for TIOA. This allows to define strategies for the system and for the environment.

The grammar of the T-AdaCTL logic used by PyECDAR can be found on the queries section.

A state in FTGA is composed by a location, a valuation of the real-time clocks, and a feature configuration. Informally the semantics of the logic is the following (formal definitions can be found in [CLST13]):

The semantics of path formulae and the other state formulae are classical from CTL and TCTL.

We propose in [CLST13] model-checking algorithms to check T-AdaCTL formulae. These algorithms applies a classical backward propagation used for timed games algorithms. They are implemented in PyECDAR.