The second edition of Graphyz took place at the Saline Royale of Arc-et-Senans, France, from October 16 evening to October 19 mid-afternoon. Attendance was limited to around 80 participants (participants had to register early).

Snow avalanches, fluid flows, hair and cloth motion are just a few examples of the many phenomena that have been approached by both the computer graphics and the physics/mechanics communities. In graphics, the focus is primarily on developing numerical models that are visually convincing, efficient and controllable, so as to serve narrative and artistic goals, while physics/mechanics is all about developing predictive mathematical models and confronting them to real experiments. Because of these different focuses, the interaction between the communities has remained limited until recently. Cross-collaborations have surged when researchers from both sides started to realize their shared interest for capturing the rich couplings between geometry and dynamics of every-day phenomena, while perceiving that their approaches complement each other nicely: computer graphics is a playground for powerful numerical methods that are not known to most physicists/mechanicians; conversely, the accuracy of the physical/mechanical models can serve numerical efficiency and visual realism well.

Following the large success of the first edition of Graphyz launched in 2019, this second edition of Graphyz aims at continuing to foster collaborations and exchange of ideas between our two communities, by focusing on a few promising topics.

New for this second edition: sessions for open talks were organised, with a call for contributions! See more details here. 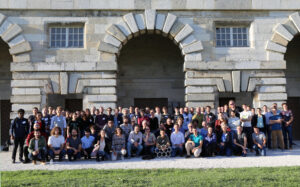 Graphyz2 is organised with the support of the Saline Royale of Arc-et-Senans, as part of the Rencontres de la Saline. Other supporting organisations include Inria, Laboratoire Jean Kuntzmann, Persyval-2, GdR Mephy, and LaSIPS.