Project Sherpam has started in October 2014, and several important results have been already obtained.

We have chosen to present on this first page the principal elements that describe the globality and the interactions between the actors of the project. A more developed page concerning the challenges, the realizations and the perspectives of each part of the project can be reached through the links below.

A complete literature review regarding activity recognition has been performed during the first months of the project. In the meantime, several medical devices were studied. Three distinct devices (Actigraph, Shimmer and Zephyr) were selected for a comparison in respect of several constraints such as accessability of raw data, compatibility with Casa development as illustrated in the following picture: 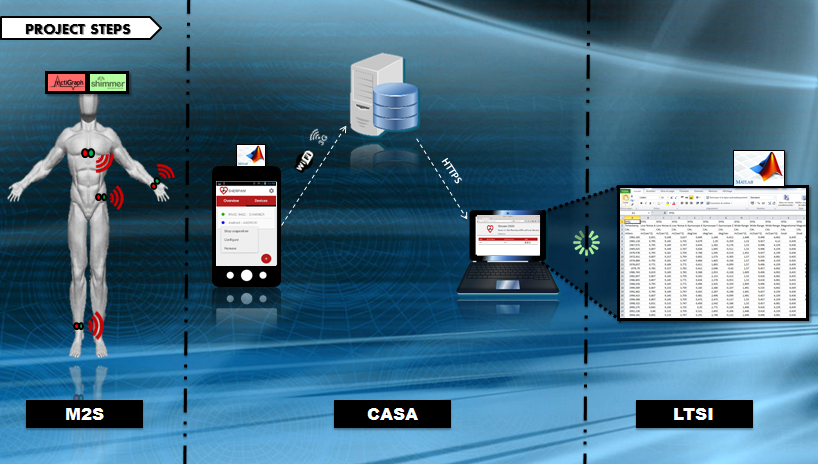 Backbone of the system

The Sherpam system covers all stages of data acquisition, transmission, and processing.

A modular Android application aggregates data from various types of sensors and transmits these data to a remote aggregation server for storage and analysis. Several kinds of sensors are supported to date: sensors embedded in Android and Android-wear devices, Shimmer sensors, Zephyr sensors, and sensors that comply with IEEE 11073 recommendations. The modularity of the application allows additional software components to be “plugged in”, such as modules for new kinds of sensors, data processing algorithms, or modules defining transmission strategies. A web application provides access to the data maintained on the aggregation server, and it can also send alerts to the user’s smartphone.

The field of automatic recognition of physical activity attracted the interests of many researchers over the last decade. Of great interest are its potential applications in the pervasive e-Health domain: chronic disease diagnosis and treatment, healthcare monitoring, and rehabilitation assessment. Therefore, successfully detecting vigorous motion such as walking, cycling and static postures such as sitting, standing helps providing feedback about the behavior of the targeted individual.

The general procedure of physical activity recognition includes feature extraction phase then classification phase based on selected feature vector. The model should be trained and finally tested by assessing its performance in predicting the activity. In line with the previous studies, our contributions during the first year of the Sherpam project, was the selection of appropriate measures and the development of a display method of the extracted information that we call “dist-colorimetrics” designed for activity indentification. 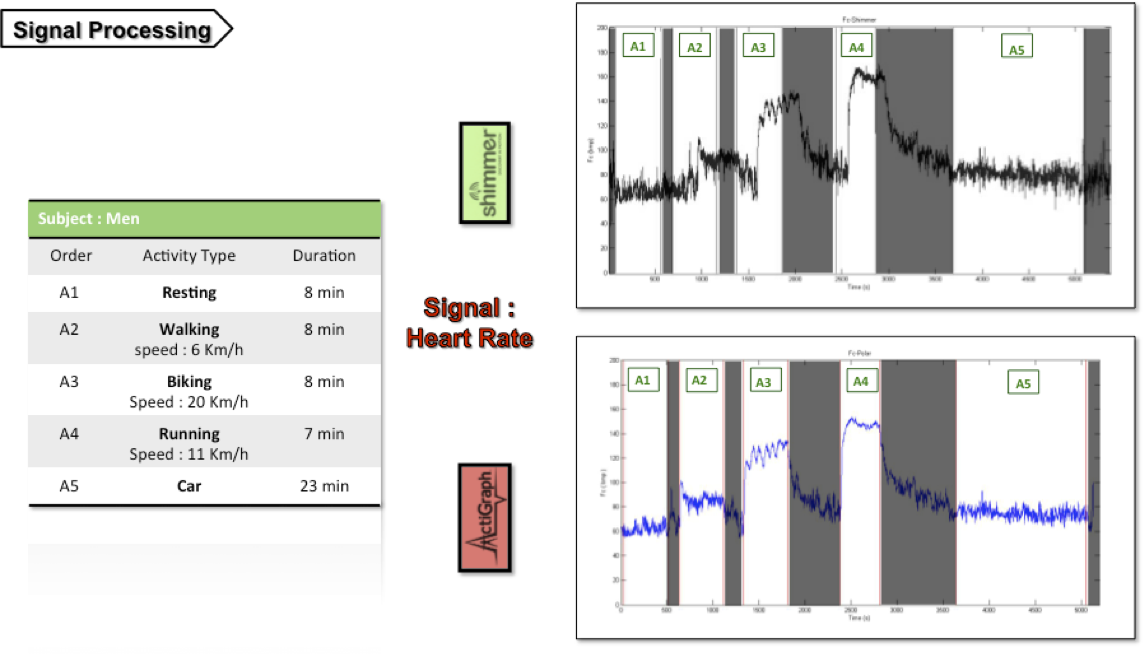 In the scope of the Sherpam project, targeted population were selected and a complete clinical trial protocol is now designed and will be soon submitted to the ethics committee (for further details see the page protocol ).

Past studies reveal substantial inequity when confronted to sensor acceptance factors. Firstly, literature review indicates a large amount of publications for heart failure telemonitoring management whereas very little content was found for arteriopatic patient’s disease management. Secondly, if a lot of research is done in wearable computing, few specific human factors models have studied both targeted groups. Therefore, an understanding of sensor behavioural usage conditions (for further details see the page human factors) has been being achieved during the first year with the attempt 1) to list the various specifications for both patients’ characteristics; 2) to understand and reduce this disparity. Specifications based on wearable sensors acceptance models will allow a sharpened adaptation of technical functionalities. Such perspective will nonetheless be associated with the analysis of the benefits and outcomes for health practitioner in order to distinguish whether they need such system and how it could fit in their daily routines.This human factors definite during the first year have been used to develop the clinical trial protocol. Three questionnaires have been elaborated in order to mesure the acceptance of the technological device SHERPAM during the users’s experiment.